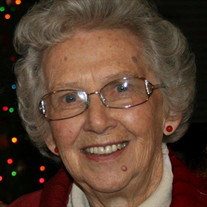 A. “Jean” Waddell, 90, of Traverse City passed away on Monday, June 30, 2014 at Boardman Lake Glens – Brigadoon. Jean was born on February 15, 1924 in Oil City, PA to the late Elmer and Madelene (Bates) Olson. She married her best friend John C. “Jack” Waddell on July 1, 1950 in McKeesport, PA and their love remained strong through 54 years of marriage until his death on June 5, 2005. Jean was also preceded in death by her brothers John “Jack” Olson of Royal Oak, MI and Paul Olson of Lexington, KY. Jean is survived by her three daughters; Elaine (Warren Lawrence) Waddell of Eagle, CO, Suzan (Michael) Vogel of Sandy, UT and Andrea (Philip) Koski of Edwards, CO. Also surviving are four grandchildren and four step-grandchildren. Jack and Jean lived in Grand Rapids, MI for over 35 years where she worked as an executive secretary before becoming a homemaker. Upon retiring, the couple split their time between Traverse City, MI and Tucson, AZ. After Jack's death, Jean divided her time amongst Traverse City, Utah and Colorado. She was an active member of the Christian Scientist Church and the League of Women Voters. Jean truly loved traveling and jazz music. She and Jack had many years of pleasure attending jazz festivals and dancing to the big band era tunes. Above all, spending time with her family is what gave Jean the most joy. In accordance with Jean’s wishes cremation has taken place. A celebration of Jean’s life will be held on Saturday, July 26, 2014 at 4:00 p.m. at Jean Waddell's Home. Please call 231-392-3100 for more information. Details can be found on Reynolds-Jonkhoff webpage. In lieu of flowers, those planning an expression of sympathy may wish to consider a memorial donation to First Church of Christ, Scientist, Traverse City, MI. Please feel free to share your thoughts and memories with Jean’s family at www.reynolds-jonkhoff.com.

The family of A. Jean Waddell created this Life Tributes page to make it easy to share your memories.