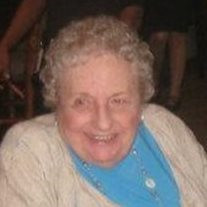 Adeline M. Dockery, 91 of Williamsburg, passed away Tuesday, March 04, 2014 at Munson Medical Center. Adeline was born on August 9, 1922 in Chicago, IL to the late Stephan W. and Maryanna J. (Patryas) Hoyne. She married Bernard “Bernie” J. Dockery on August 18, 1951 at Our Lady of Mount Carmel Catholic Church in Chicago, IL. Together they lovingly raised five wonderful children. Adeline lived in Chicago for 65 years prior to moving to the Williamsburg area where she lived the remaining years of her life. She was a dedicated member of the Sacred Heart Church in Elk Rapids and loved to garden. Most importantly, Adeline loved her family. She was a wonderful mother, grandmother and great grandmother and she will be deeply missed by all who knew her. Surviving Adeline are her children, June (Sam) Valenti of Sunnyvale, CA, Mary (Joe) Dockery-Jackson of Rock Island, IL, James (Michele Miles) Dockery of Park Ridge, IL, Thomas Dockery of Williamsburg, MI and Sharon (Jeffrey) Carter of Wyoming, MI, 17 grandchildren and 12 great grandchildren. Adeline is preceded in death by her parents, husband Bernie, and one brother, Jerome Hoyne. Visitation will be held for Adeline on Friday, March 7, 2014 from 4-6pm with a 5:30pm Vigil at The Reynolds-Jonkhoff Funeral Home. A Mass of Christian Burial will take place at 11:00 am on Saturday, March 8, 2014 at Sacred Heart Catholic Church with visitation held one hour prior. Interment will take place in the spring at Sacred Heart Cemetery in Kewadin. Memorial contributions may be directed to Mass Intentions or a charity of one’s choice. Please sign Adeline’s online guestbook at www.reynolds-jonkhoff.com. The family is being served by the Reynolds-Jonkhoff Funeral Home.

The family of Adeline M. Dockery created this Life Tributes page to make it easy to share your memories.