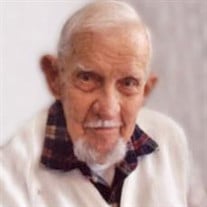 Alan E. Olsen died peacefully at Samaritas Senior Living in Williamsburg, MI on October 17, 2019. He was 96. Born July 14, 1923 to George and Lottie (Jarvey) Olsen in Hancock, MI, he grew up learning to make-do with what the family had. His playgrounds were the streams nearby, outlying areas of the copper mines and the electric streetcar park. He graduated from Hancock Central High School in 1941 and signed up for a short stint in the Civilian Conservation Corps Camp Paulding, in the western Upper Peninsula. Alan often said this was his best preparation for his eventual enlistment in the U.S. Army. High test scores early in basic training, placed him in the Army Specialized Training Program, an accelerated study of college-level engineering based on brains and previous education. He was able to complete his first year of college at Johns Hopkins University in Baltimore, prior to departing for Europe. During his military service, Alan was a combat infantry soldier in the 84th Infantry Division, European Theater of Operations with active involvement in the Battle of the Bulge and the Rhinelander, Ardennes and Central Europe Campaigns. At the end of the war, he remained in Germany for six months as a depot manager, working with displaced persons. Upon his discharge from the Army in 1946, he enrolled at Michigan Technological University, receiving a B.S. degree in Chemical Engineering in 1949. Following other Copper Country natives to the Woodrow Wilson area of Detroit, he first found work at Cadillac Motors and then at Udylite Corporation, an electroplating company where he spent the majority of his career in technical service, sales and marketing. Business travel took him throughout the U.S. and abroad, fueling his natural curiosity. Through mutual friends, Alan met Dorothy Kauranen in Detroit and they wed in 1957. Initially residing in Livonia, the couple moved to Atlanta, GA for four years as Alan developed and provided technical service to electroplaters in the Southeast region, prior to returning to the Livonia home. They had two children, Colin and Christine, and he was the go-to for homework help. Alan loved his pasties with ketchup, aimless drives around the Keweenaw Peninsula, cold beer, coffee and korppu in the Finnish tradition, his three lovely granddaughters and all of his granddogs. He was an avid golfer, playing until he was 92. It was a passion that was shared with his two children and his Saturday golfing foursome of more than 40 years. Alan was intelligent, well-travelled, a storyteller, a jokester, a writer, a reader (especially espionage), enjoyed bowling, playing bridge, tinkering on the piano and his ukulele, and in his later years, was a big flirt. His written memories of WWII and other wartime mementos will become part of the collection at Michigan Technological University Archives. Alan is survived by son, Colin, of Howell and daughter, Christine, of Williamsburg; granddaughters Callie (Ryan) Ebright, Mikaila Olsen, Annika Olsen; great-grandson Connor Ebright and numerous nieces and nephews. Alan was preceded in death by his wife, Dorothy (May 2019), parents, sister Jeanne and brother Donald. Burial will take place in June 2020 at Lakeside Cemetery in Hancock. In July 2019, Alan participated in the Rivers of Recovery veterans fly fishing retreat, and after, a scholarship was created in his name. A memorial contribution in Alan’s honor is a gift to deserving combat veterans returning from their own war-time experiences, continuing his legacy of giving back to those who sacrifice to protect and defend our nation’s freedom. Contributions can be mailed to Rivers of Recovery, P.O. Box 22326, Eagan, MN 55122 or online at http://bit.ly/alaneolsen.

Alan E. Olsen died peacefully at Samaritas Senior Living in Williamsburg, MI on October 17, 2019. He was 96. Born July 14, 1923 to George and Lottie (Jarvey) Olsen in Hancock, MI, he grew up learning to make-do with what the family had. His... View Obituary & Service Information

The family of Alan E. Olsen created this Life Tributes page to make it easy to share your memories.