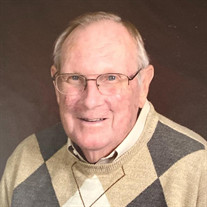 Alan Staley, 88, a resident of Interlochen passed away Saturday, Nov. 27, 2021, at his home surrounded by his loving family, with the support of Hospice of Michigan. He was born June 28, 1933 in Watertown, South Dakota, the youngest son of Marshall and Gertrude Staley. He graduated from Watertown High School, where he earned the ranks of first chair trombone player and state awards for instrument and vocal musician. Using that musical talent, he performed in several city dance bands. On July 2, 1955 he married the love of his life, Patricia Lewno in Waubay, South Dakota. During the 66 years of their marriage, he and Pat were blessed with four wonderful children, eight grandchildren and one great grandchild (with another on the way.) Through the years he worked in management for several retail stores across the United States, including JC Penney, Fisher Big Wheel, Tempo, and Gambles. Each successful store employment earned him a transfer to his next challenging opportunity, taking he and his family from South Dakota to North Dakota, Montana, Idaho, Iowa, Minnesota and finally, Traverse City, Michigan, where he eventually retired from Brown Lumber. His life’s work was not just for his employers as he was a man devoted to God, his Lord and Savior. He was a dedicated volunteer at his church, starting as a founding member of St. Patrick Catholic Church. He continued as a very active member, including usher, Eucharistic Minister, Pastoral Council, Men’s Club and prayer group. He flipped many a pancake and insured the food was hot & ready for church breakfasts in the social hall and the church food tent at the Buckley Old Engine Show. He was honored to be recognized for his contributions when he received the 1st Volunteer Service Award from the Diocese of Gaylord. He enjoyed pheasant & duck hunting, fishing, camping and woodworking, passing those traditions on to his children and grandchildren. He will be remembered as a dedicated and loving husband, father, grandfather and a very hard worker. He is survived by his wife of 66 years, Pat Staley of Interlochen; children Tom (Debbie) Staley of Round Lake Beach, IL; Kathy Hofius (John Trompeter) of Washington, MI; Chris (Christine) Staley of Interlochen, MI; and Jim (Dawn) Staley of Fife Lake, MI; grandchildren David, CJ (Miranda), Robert (Jamie), Jacob (Kirstin), Sasha, Andrey, Afton and Aila; and great grandson Graham. He was preceded in death by his parents, brother Bud, son-in-law Mark Hofius and daughter-in-law Penny Staley. A memorial Mass will be held on Friday, December 3, 2021 at St. Patrick Catholic Church at 11 am. Father Gerald Okoli will preside. Visitation will be held starting at 9:30 am prior to Mass. Interment St. Aloysius Catholic Cemetery, Fife Lake, MI. Arrangements by Reynolds Jonkhoff Funeral Home, Traverse City, MI. The Staley family wishes to thank the wonderful staff of Orchard Creek Rehab, Rebecca of NPalliative Care, Mary of Hospice of Michigan, and Deacon Rene Hoenscheid of St. Patrick Catholic Church for their compassionate care.

Alan Staley, 88, a resident of Interlochen passed away Saturday, Nov. 27, 2021, at his home surrounded by his loving family, with the support of Hospice of Michigan. He was born June 28, 1933 in Watertown, South Dakota, the youngest son of... View Obituary & Service Information

The family of Alan W. Staley created this Life Tributes page to make it easy to share your memories.

Alan Staley, 88, a resident of Interlochen passed away Saturday,...