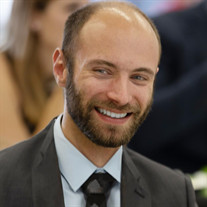 On July 21, 2019 a beloved Son, Brother, Boyfriend, and Friend went to be with the Lord. Alex David Gill, 24, native of Traverse City, passed away early Sunday morning due to injuries sustained in a tragic car accident. The accident occurred in Cheyenne, WY when a driver crossed the center line and collided with the car Alex and two of his friends were riding in. Alex, along with his two friends, were heading west to celebrate the beginning of Alex’s career with Raytheon Intelligence, Information, and Services in Indianapolis as a software developer and Stevie Biddle’s impending marriage. Stevie, the driver, also lost his life. All avid rock climbers, their trip brought them to the Black Hills in South Dakota and Devil’s Tower in Wyoming, and they were off to the Grand Tetons. Alex graduated in Central High School’s class of 2013, where he was a star student. Alex was involved with the ski team, debate team, and his biggest passion, robotics. He then attended Michigan Tech University, graduating with a bachelor’s degree in Computer Science. Although Alex was known by many for his intelligence, he was gifted with something far more powerful: his faith in God, and his adoration of the Catholic Church. In every sense, Alex was a dedicated man of God. He was a prolific missionary for The Fellowship of Catholic University Students (FOCUS) at the University of Wisconsin, Platteville. He was an inspiring, serene, well-respected man who guided scores of souls to faith through his strong and quiet example of a Christ-like life. Alex was an incredible listener whose few words, when spoken, resonated deeply with those who heard. Few people loved the pensive beauty of nature as much as Alex. Alex leaves behind his mother, Judy; sister, Megan (Alex) Morris of Lansing; girlfriend, Marissa Schorr of Bloomington, IN; grandmother, Dorothy Gill and uncles Roger (Connie) Gill and Gary (Trudy) Gill, both of Griffin, GA; uncle Julius (Carol) Zsako of Denver, CO; uncle Steven Zsako of El Paso, TX; aunt Clara Redman of Caracas, Venezuela; aunts Sheila (Ron) Birch and Jean (Kevin) McCafferty of Cleveland, OH; and numerous additional aunts, uncles, cousins, friends, and brothers and sisters in Christ. Alex joins in eternity his father, David; Aunt Janet King (Robert Rogers); grandfather Harry Gill; and grandfather Steven (Margie) Zsako. Mass of Christian Burial will take place 11AM, Sat. July 27, 2019, at Christ the King Catholic Church, 3801 Shore Road, Williamsburg, MI 49690. Visitation will be held from 5-7PM, Friday, July 26, also at Christ the King Catholic Church. Alex will be laid to rest in the Oakwood Catholic Diocesan Cemetery, Traverse City. Memorial contributions may be directed to the Fellowship of Catholic University Students (FOCUS), to which Alex devoted the last two years of his life: FOCUS, Attn: Alex Gill Fund, PO Box 17408, Denver, CO 80217 or online at https://www.focus.org/alex-gill. Alex and his family are being cared for by Reynolds-Jonkhoff Funeral Home and Cremation Services.

On July 21, 2019 a beloved Son, Brother, Boyfriend, and Friend went to be with the Lord. Alex David Gill, 24, native of Traverse City, passed away early Sunday morning due to injuries sustained in a tragic car accident. The accident occurred... View Obituary & Service Information

The family of Alex David Gill created this Life Tributes page to make it easy to share your memories.