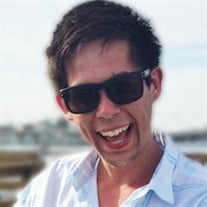 Alexander ‘Alex’ Richard Grizzel, 23, of Traverse City passed away Saturday, October 14, 2017 at his home. Alex was born Wednesday, July 13, 1994 to Richard and Anne (Bartosek) Grizzel in Traverse City, MI. Alex spent his life looking for adventure and finding joy in living on the edge. He was a talented hockey player who played on local travel teams, before spending a year in Detroit playing for the Belle Tire U16 AAA Midget Minor’s. He then moved back to Traverse City to play for the Titans and graduated from Traverse City West High School. He was studying to earn his builders license and worked at the Crown Golf Course in construction and development. He was the best friend, son and brother that anyone could have asked for. He had an infectious smile and an endearing personality. He always left you a happier person after seeing and talking with him. He was honest to a fault, had a positive outlook and never spoke poorly of anyone. He was a hard worker and was learning all aspects of the family business hoping one day to carry on his father’s legacy. He was active and loved sports, including skateboarding, hockey, golf and motocross. Life, however, was not perfect for Alex. It was in his enormous capacity to care for others that Alex somehow, someway neglected himself. He struggled with addiction. He was working hard to overcome these addictions and was making real progress towards sobriety. Alex’s family would like the community to understand that addiction is a disease and we need to work towards acceptance and solutions for those who struggle. Alex will be dearly missed by his parents Richard and Anne (Bartosek) Grizzel; sister Katie (Mike) Hanson; Aunt Lois Schneider; Uncle Steve (Jan) Bartosek; cousins Jenifer, Jamie, Kevin, Kelsey, Dustin, Allore and Cameron; and his beloved dogs Ove, Izzy, Sophie and Jade; and many friends who called him brother. A celebration of life will be held on Friday, October 20, 2017 at 3 p.m. at the Reynolds-Jonkhoff Funeral Home, with visitation beginning at 2 p.m. Pastor Christopher Cox will officiate. In lieu of flowers the family asks those wishing an expression of sympathy to give to Addiction Treatment Services, 1010 South Garfield, Traverse City, MI 49686.

The family of Alexander Richard Grizzel created this Life Tributes page to make it easy to share your memories.