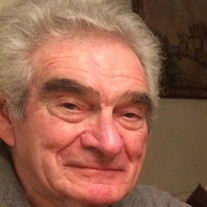 Alfred Karl Neugebauer, 88, of Traverse City MI passed away peacefully on Monday November 25, 2019. “Al” was born on 3 October 1931 in Grottkau, Germany. He was the eldest son of Hedwig and Alfred Neugebauer. He is survived by Maxi, his wife of 51 years; his daughter Karla Neugebauer (from a previous marriage to Nancy Durholz) and her husband Jonathon Howard, who are both professors of biology at Yale University; his grandchildren Olivia Howard and Peter Neugebauer; his siblings all residing in Germany: Horst and his wife Uschi Kampmann, Hans and partner Ingrid, and his sister Barbara; his brother and sister-in-law, Viktor and Alice Weyand of Traverse City; and his dog Mia. Al attended the historic Carolinum Gymnasium in Neisse Germany before the Red Army swept through the region in January 1945. Al, Hedwig and his younger brothers made their way west to Bensheim, where he completed his education. He received an advanced degree in Economics in Mannheim. Acting on a desire to see the world, Al worked in the travel business for two years in Darwin Australia, where he notoriously held a side job hunting Crocodiles. Emigrating to the United States in 1957, Al landed his first job in Detroit at E. F. McDonald Company, a pioneer in the incentive travel business. After several leadership positions in other firms, he acquired his own company, Dewald Event Management and Travel in the Detroit area. In 1968, he married Maxi Weyand, who came to the US with the Austrian Ski School to teach skiing at Boyne Mountain. Al and Maxi enjoyed an active outdoor life of skiing, tennis, and sailing. Al also loved to build things of his own design, from home saunas to a wonderful barn to store their multitude of outdoor equipment. There will be a Funeral Mass for Al at St Michael’s Church in Sutton’s Bay, on Saturday 7 December 2019 at 11:00 am. In lieu of flowers, contributions in his memory may be made to Traverse Area Recreation and Transportation (TART) trails. TART Trails, Inc., PO Box 252, Traverse City, MI 49685 or at www.traversetrails.org.

Alfred Karl Neugebauer, 88, of Traverse City MI passed away peacefully on Monday November 25, 2019. &#8220;Al&#8221; was born on 3 October 1931 in Grottkau, Germany. He was the eldest son of Hedwig and Alfred Neugebauer. He is survived by Maxi,... View Obituary & Service Information

The family of Alfred Karl Neugebauer created this Life Tributes page to make it easy to share your memories.