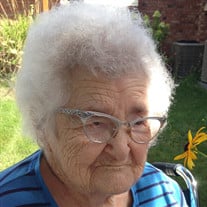 Alice M. Campbell, 98, of Traverse City, passed away Sunday, May 3, 2015 at Bortz Health Care in Traverse City. Alice was born on Monday, August 28, 1916, the daughter of Harlow and Blanche (Martin) Link in Benzie County. She married Clifford G. Campbell on Tuesday, March 2, 1937 in Traverse City, and he preceded her in death on April 26, 2000. Having moved to Traverse City from Benzonia, Alice had been a resident here for over 70 years. She was an LPN and had worked for Traverse City Osteopathic Hospital as well as Munson Medical Center, and also had worked as a private duty nurse. Alice retired from health care in 1973. She enjoyed raising flowers, her three dogs and was a voracious reader. Alice is survived by 15 grandchildren, 14 great-grandchildren; a sister, Ardith Hackett of Traverse City and two daughters in law, Darleen Campbell of Traverse City and Anne Campbell of Wisconsin. In addition to her parents and husband, she was preceded in death by her children, Sandra Bliss, Marie Henshaw, Jerry Campbell and Tony Campbell, as well as her brother Forrest Link, sister, Jean Rideout, sons-in-law Robert Moyer, Lynn Bliss, Gerry Henshaw, grandson Kenneth Henshaw and granddaughter, Jennifer Richards. A memorial service celebrating Alice’s life will take place at 4 p.m. Saturday, August 22, 2015 at The Reynolds-Jonkhoff Funeral Home. Interment will be in Grand Traverse Memorial Gardens. Memorial contributions may be directed to the Cherryland Humane Society or to a charity of one’s own choosing. Please share memories of Alice with her family by visiting her guest book at www.reynolds-jonkhoff.com The family is being cared for by Reynolds-Jonkhoff Funeral Home and Cremation Services.

The family of Alice M. Campbell created this Life Tributes page to make it easy to share your memories.