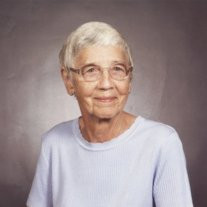 Burdickville - Alice Electa Cheek, 80, of Burdickville passed away on March 20, 2013 at her home surrounded by her loving family who had the privilege of caring for her during her last days with the assistance of their devoted Hospice Nurse, Jacob Chard. Alice was born at home in Burdickville on September 13, 1932, the daughter of Robert and Lenore (Holden) Ashmore. She attended Traverse City High School and then worked as a telephone operator for Michigan Bell. She met the love of her life and best friend, Donald L. Cheek, when he was stationed at the Empire Air Force Base. They married on November 3, 1951 at Immaculate Conception Church in Traverse City. Alice was an accomplished seamstress and spent many hours sewing for her children, husband, and the many Barbie Dolls her four daughters played with. She was very active in the school her children attended. She enjoyed harvesting fruits and vegetables, and canning and preserving them for her family. Alice’s baking was outstanding and many looked forward to her homemade cinnamon rolls and other desserts. She and her husband developed an interest in antiques and owned and operated the Weathervane Antique Shop in Glen Arbor for many years. She was an expert in antique furniture refinishing. Alice and Don enjoyed fishing and spent many hours on local lakes together. The greatest joy in Alice’s life were her grandchildren and great grandchildren and they adored their “Gram” and “Gram Gram”. Alice was the devoted mother of Donna (Kim) Hillard, Robert Cheek, Beth (Roger) Noonan, Cynthia (William) Holbrook and Martha McCort; the doting grandmother of Jeremy (Amanda) Steele, Joanna (Teague Mullen) Jacobs, Dane Hillard, Heidi and Mackenzie Cheek, Ryan (Denise) and Casey (Becca) Noonan, Sarah (Garrett) Guffey, and Maxwell McCort; the adoring great grandmother of Brendan and Bryan Steele, Heaven Jacobs, Lily, Grace, and Eden Noonan, and Adeline Guffey; the loving sister of Dorothy “Dottie” Lanham, Susan McManus, and Richard Ashmore; the loving aunt and great aunt, and honorary aunt of many nieces and nephews. After nearly 50 years of devoted marriage, she was preceded in death by her husband; her great grandson Lucas Clark Noonan, infant brother Robert Ashmore, beloved siblings Ione Lanham and John Ashmore, and niece Linda Lanham Tegart. Funeral services will be held on Sunday, March 24, 2013 at 2:00 pm with visitation beginning at 1:00 pm at the Glen Lake Community Reformed Church. Cremation has taken place and burial will be in the spring at Rose Hill Cemetery. In lieu of flowers, memorial contributions may be directed to the American Diabetes Association or to Munson Hospice.

Burdickville - Alice Electa Cheek, 80, of Burdickville passed away on March 20, 2013 at her home surrounded by her loving family who had the privilege of caring for her during her last days with the assistance of their devoted Hospice Nurse,... View Obituary & Service Information

The family of Alice Electa Cheek created this Life Tributes page to make it easy to share your memories.