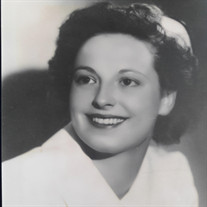 Alice Diggins, a longtime resident of East Lansing and Empire MI, died peacefully Sunday the 6th of October at the age of 96. Alice was born May 28, 1923 to Solomon and Gertrude (Dorsey) Coppens in Michigan City, Indiana. She graduated from high school in Empire, MI in 1944 and continued her education at Butterworth Hospital School of Nursing, before enlisting in the US Army. Alice then became an original cadet member of the Army Nursing Corp, finishing her education at Camp McCoy in Wisconsin where she met the love of her life, Lt. Vance William Diggins (predeceased 2006). A proud veteran, Alice served her country in the South Pacific on the Island of Tinian and in Tokyo, Japan from 1944 until her discharge as a 1st Lieutenant in 1946. After Lt. Vance Diggins returned from his duty in Europe the two were married in November of 1946. The loving couple went on to have 5 children and eventually settled in East Lansing, MI. While raising her family Alice was a Diabetes Educator at Sparrow Hospital. She was a pioneer in the researching of blood monitoring on pregnant women with Diabetes. Alice was also very active in her community. Throughout her years she was a member of the East Lansing Traffic Commission, Sparrow Hospital Women’s Board of Managers, Glen Lake Women’s Club, Lake Shore Readers Club, and Glen Lake Community Library Association. She served as president of both the East Lansing Library Board and Sparrow Hospital TLC Critical Care. Alice was a talented seamstress with an infectious laugh and an amazing sense of humor. A devoted Catholic she was a proud congregant of St. Philip Neri Roman Catholic Church. Alice and Vance retired permanently to their beautiful home in Empire, MI in early 2000. Devoted to each other the two enjoyed the beautiful Empire Beach, playing bridge with their dear friends and listening to Big Band and Classical music. Alice, lovingly known as Coppie, was a nurturer and an incredible grandmother. There was nothing more important to her than family. Predeceased by her husband Vance in 2006, Alice is survived by her children Sally Shepard, Martha Gerlach, Nancy Gleffe and her husband Robert, Vance Diggins and his wife Jane, and John Diggins and his wife Karen. She was blessed with 10 grandchildren and 4 great grandchildren. Alice also leaves behind her sister Barbara Vogel, sister-in-law Sue Anne Coppens and numerous nieces and nephews, all of whom she loved dearly. At this time the family will be having a private memorial service. In her honor, a “Celebration of her Life” will be scheduled after the new year. Please feel free to share your thoughts and memories with Alice’s family at her tribute page at www.reynolds-jonkhoff.com. The family is being cared for by the Reynolds-Jonkhoff Funeral Home and Cremation Services.

Alice Diggins, a longtime resident of East Lansing and Empire MI, died peacefully Sunday the 6th of October at the age of 96. Alice was born May 28, 1923 to Solomon and Gertrude (Dorsey) Coppens in Michigan City, Indiana. She graduated from... View Obituary & Service Information

The family of Alice "Coppie" Diggins created this Life Tributes page to make it easy to share your memories.

Alice Diggins, a longtime resident of East Lansing and Empire...