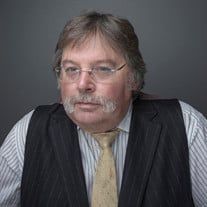 Allen G. Anderson, a longtime resident of the Traverse City area, was called to his Savior and everlasting life on November 18, 2019, after suffering a heart attack. Born in Detroit Michigan, November 22, 1953, Allen was a gifted and talented person who drew great satisfaction from the natural beauty of the lakes and woods of Northwest Michigan and classical music compositions. He graduated with distinction from Albion College in 1975; receiving a degree in the Natural Sciences. He was a cum laude graduate of The Thomas M. Cooley Law School, attaining his Juris Doctor in 1983. Since the 1980s, he has practiced as an attorney with Smith and Johnson PC of Traverse City where he enjoyed serving his many clients. Among his professional accomplishments are the American Jurisprudence Award for Excellence; his admission to the practice of law before the United States Supreme Court, all Michigan State and Federal Courts, the Sixth and Eighth Circuits of the United States Courts of Appeals, the United States Court of International Trade, the United States Court of Military Appeals, and the United States Tax Court; and his selection by the Institute of Continuing Legal Education (ICLE) to serve as a commentator on all aspects of its labor and employment law seminars. Over the years, he has enjoyed an active role in various business and commercial ventures. The Public Service Garage in Traverse City was one of his most cherished business endeavors, as it was dedicated to serve the local community with reputable automotive services in a setting that catered to its customers needs. He enjoyed a wide circle of friends in Northern Michigan and beyond, staying in touch with all whom he met. He cherished his friendship with Father Hayden and many others within the Immaculate Conception Parish. He will be fondly remembered by his loving family. Surviving are his mother and father Lorraine and Dr. Elwood Anderson of Alpena, siblings Roger (Charlottesville, Va), Rogill Clute (Alpena), Thomas (Alpena), John (Amarillo, TX), and Paul (Alpena). A memorial service honoring Allen will be held at 11:00 a.m., with visitation starting at 10:00 a.m., on Monday, November 25, 2019 at the Reynolds-Jonkhoff Funeral Home, 305 Sixth St., Traverse City, MI 49684. Father James Hayden will officiate. Donations can be made in Allen’s memory to the Cherryland Humane Society. Please feel free to share your thoughts and memories with Allen’s family at his tribute page at www.reynolds-jonkhoff. The family is being cared for by the Reynolds-Jonkhoff Funeral Home and Cremation Services.

Allen G. Anderson, a longtime resident of the Traverse City area, was called to his Savior and everlasting life on November 18, 2019, after suffering a heart attack. Born in Detroit Michigan, November 22, 1953, Allen was a gifted and talented... View Obituary & Service Information

The family of Allen G. Anderson created this Life Tributes page to make it easy to share your memories.