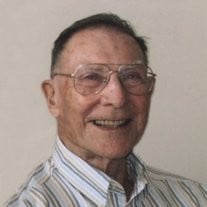 Allen William Bush was born on April 28, 1923,as the oldest child of Mildred and Lewis Bush in Parchment. He passed away on September 9, 2013 following lengthy treatments for numerous medical issues. He is survived by his wife of 65 years, Lois and his two children, Allen S. (Cindy) of Traverse City and Garry L. (Becky) of Gaithersburg, MD and their families; which include four grandchildren and five great grandchildren. He is also survived by two sisters, Barbara Gruizinga and Audrey Merrill. Al graduated from Kalamazoo University High School in 1941 and enrolled at Western Michigan University. He enlisted in the United States Marine Corps in January of 1942 and served from 1942 to 1946 with 21 months in the South Pacific Islands before being selected to receive Officer Training and a college education in the V-12 program. He played varsity football and baseball at Princeton, until he was transferred back to Western Micchigan University in 1946. He then graduated from Western with a B. S. degree and an officer's commission. While at Western, he was the captain of the football team and its most valuable player. After graduation from college, he taught mathematics and coached various sports for Battle Creek Central High School. He was then recalled to the Marine Corps in 1951 during the Korean Conflict. Upon discharge, he resumed his coaching and teaching career at Kalamazoo University High, Dearborn High, and Bay City Handy High School. In 1953, during his tenure at Dearborn High, Al earned his Masters Degree from the University of Michigan. In 1960, he was hired by the Michigan High School Athletic Association as an Assistant Director. He was promoted to Associate Director in 1963 and then he became the Executive Director of the Association from 1968 - 1978. During his tenure as the Executive Director, he added numerous athletic tournaments in the schools and most notably began the steady addition of female athletic programs in the secondary schools in the State of Michigan. During his tenure and after retiring, he served on numerous rules and sports committees and was awarded the Western Michigan Man of the year (1975), the National Association Sports Award and many other honors. He also served as the manager of the USA Basketball team to the World games in Austrailia in 1978. In 1980 he became an Assistant Professor for Sports Adminsitration for Biscayne Bay College and worked there until 1983 when he returned full time to his home on Cub Lake in Kalkaska County, Michigan. He was the president of the Bear Lake Township Improvement Association (1984-85), a member of the Kalkaska Board of Education (1984-85), and a treasurer of the WMU alumni chapter (1992-94). He was also inducted into the Western Michigan University Athletic Hall of Fame in 1986. In addition, he was a longtime member of the Mishigan Sports Sages. His family is grateful to Munson Medical Center staff and the staff of the Munson Healthcare Dialysis Center, to all of the doctors, notably Drs. Burke and Amanzadeh, and to all of the staff who treated him so well over the past years. A memorial service willl take place at 11 a.m. Friday, Sept. 13 at Central United Methodist Church, 222 Cass Street, Traverse City with Pastor Dale Ostema officiating. Visitation will begin at 10 a.m., also at the church. Interrment will be in Fort Custer National Cemetery in Galesburg, MI on Monday Sept. 16, 2013. Memorial contributions may be directed to the Mike Gary Athletic Fund, Western Michigan University, Read Fieldhouse, 1903 Michigan Avenue, Kalamazoo, MI 49008-5406.

Allen William Bush was born on April 28, 1923,as the oldest child of Mildred and Lewis Bush in Parchment. He passed away on September 9, 2013 following lengthy treatments for numerous medical issues. He is survived by his wife of 65 years,... View Obituary & Service Information

The family of Allen William Bush created this Life Tributes page to make it easy to share your memories.