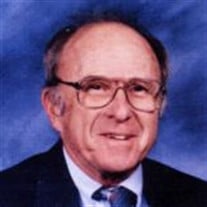 Allen George Scheck, 83, of Traverse City, passed away on January 20, 2015. Allen was born on December 8, 1931 in Chicago, IL, to his parents, the late Erwin Herman and Katharine (Weiher) Scheck. In August 11, 1953, he enlisted and proudly served his country in the United States Army, as a heavy weapons infantryman; and was honorably discharged on June 1955. He married Marilyn Jeanine Carder on December 26, 1953, in Traverse City, together they raised their four children and celebrated 61 years of marriage. Allen attended and graduated from Northwestern Michigan College, in 1953. with an Associate's Degree and was a member of the first graduating class. He graduated from Michigan State University in 1957, with a Bachelor's Degree, and earned a Master's Degree in Education in 1964, from Western Michigan University. Allen was a teacher with Harbor Springs High School from 1957 to 1961, and Battle Creek Northwestern Junior High from 1961 to 1970, and with Hastings Junior High School from 1971, until his retirement in 1985. Allen was a member of the Experimental Aircraft Association, Coast Guard Auxiliary, and a parishioner of the Presbyterian Churches of Hastings and Traverse City. He enjoyed fishing, hunting, boating, traveling by motor home, building airplanes, and was an all-around handyman and mechanic. He is survived by his wife Marilyn; son, Vern A. (Susan) Scheck; daughter, Susan E. (Harry) Mendel Jr.; son, Bruce R. (Ann) Scheck; son, Todd W. Scheck; sister, Elaine Fink; and six grand children. He is preceded in death by his parents; and brother in-law, Fred Fink. A funeral service will be held on Saturday, January 24, 2015, at 10:30 a.m. at the Reynolds-Jonkhoff Funeral Home, with visitation held one hour prior. Burial will take place at Hastings Carter Township Cemetery. Memorial contributions in Allen's name may be directed to Northwestern Michigan College. Share your thoughts and memories with Allen's family by way of his online guest book at www.reynolds-jonkhoff.com. Arrangements for the family have been entrusted to Reynolds-Jonkhoff Funeral Home and Cremation Services.

Allen George Scheck, 83, of Traverse City, passed away on January 20, 2015. Allen was born on December 8, 1931 in Chicago, IL, to his parents, the late Erwin Herman and Katharine (Weiher) Scheck. In August 11, 1953, he enlisted and proudly... View Obituary & Service Information

The family of Allen George Scheck created this Life Tributes page to make it easy to share your memories.

Allen George Scheck, 83, of Traverse City, passed away on January...