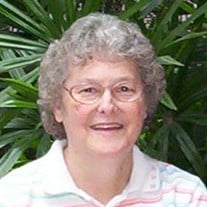 With a song on her lips and a prayer in her heart, Alva Pauline (Schneider) Priest died Monday, January 25, 2016, at the age of 80, surrounded by her loving family. Born the youngest of twelve children on January 30, 1935, in Hannah Michigan, Alva was predeceased by her parents, Anton and Amelia (Willacker) Schneider, her brothers, Walter, Cyril, Roman, Roy, and John. She was also predeceased by her sisters, Grace, Monica, and Marian. Alva is survived by her husband, Larry David, and their two daughters Margie (Sr. Mary Bernadette, F.M., of the Daughters of Mary, Mother of Our Savior), Laura (Sr. Mary Agnes, F.M., also of the Daughters of Mary, Mother of Our Savior), son, Joseph, daughter-in-law, Juliet Rogers Priest, and grandchildren, Serena and Amelia Priest, and her sisters, Eleanor Howard, Irma Calfo, and Elsie Wineman. Educated by the Dominican Sisters of Grand Rapids, Michigan at St. Mary's of Hannah, Alva treasured her education. She often spoke fondly about the Dominican Sisters. It is no wonder that both of her daughters had a desire to enter the Religious life and devote their lives to God. After high school, Alva worked at Kresge’s in Traverse City, while caring for her father, Anton Schneider, who was a widower. Having met her future spouse of fifty years in Maple City, Michigan, Alva married her dear Larry David Priest on October 9, 1965, at Immaculate Conception Church in Traverse City, Michigan. Last October, they celebrated their 50th Wedding Anniversary. Alva was a two-time cancer survivor, and toward the end of her days, she braved kidney disease. During her major illnesses, she suffered patiently, generously, and with resignation to God’s holy Will. Known for her loyal and firm faith, Alva resisted the changes that Vatican II wrought in the Church and heroically followed the advice of St. Paul the Apostle to, “Hold fast to the traditions.” Having attended the Traditional Latin Mass exclusively since 1971, she devoted herself to the loving care of the choir and sacristy duties. Both duties, Alva continued until her recent hospitalization. A wake will be held on Wednesday, January 27, 2016 at the Reynolds-Jonkhoff Funeral Home from 2 - 4 p.m. and 7 - 9 p.m. A Rosary will be prayed at 8 p.m. Alva’s Requiem Mass will be offered by Reverend Father Paul Skierka of the Congregation of St. Pius V on Thursday, January 28, 2016, at Our Lady of Fatima Chapel in Grawn, MI, at 11 a.m. The interment will be in St. Joseph’s Cemetery in Round Top, New York. Alva will be remembered by all for her love of music, witty sayings, and faithful prayer life. Having suffered from kidney disease during her last six years, Alva dedicated more time to prayer until her entire day became a prayer. One of the last aspirations she whispered was, “Jesus, this hour I give to Thee. For all the past, please pardon me. I know that soon I must depart. O, hide me in Thy Sacred Heart!" Please remember Alva in your prayers. May she rest in peace. Please share your thoughts and memories with Alva’s family by way of her online guestbook at www.reynolds-jonkhoff.com. The family is being cared for by the Reynolds-Jonkhoff Funeral Home and Cremation Service.

With a song on her lips and a prayer in her heart, Alva Pauline (Schneider) Priest died Monday, January 25, 2016, at the age of 80, surrounded by her loving family. Born the youngest of twelve children on January 30, 1935, in Hannah Michigan,... View Obituary & Service Information

The family of Alva Pauline Priest created this Life Tributes page to make it easy to share your memories.

With a song on her lips and a prayer in her heart, Alva Pauline...