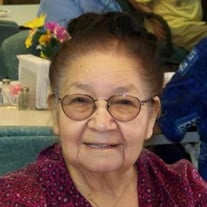 Alvina Miller Anderson Marshall, 91, of Suttons Bay passed away, Tuesday, December 29, 2020 at Munson Medical Center. Alvina was born April 29, 1929 to Archie Sr. and Susan (Yanot) Miller in Peshawbestown, Michigan. Alvina lived in Peshawbestown, formerly of Elk Rapids and Kewadin. She attended at Haskell Institute in Lawrence, Kansas and graduated from high school in Grand Rapids. Alvina attended college for a year at NMC. She was a member of Kateri Tekakwitha Catholic Church in Peshawbestown. Alvina was a proud and fierce member of the Grand Traverse Band of Ottawa and Chippewa Indians and was active in the Ottawa Indian Association which eventually helped lead to rerecognition of the Tribe in 1980. Her and Catherine Baldwin where instrumental in the identification and location of Tribal members in this early time of Tribal recognition. She taught and carried on many tribal activities and promoted the culture and language of her Tribe. She formed a native dance troupe, the Kewadin Indian Dancers, and performed locally and travelled extensively in the powwow circuit. Well loved and respected throughout Indian Country. Alvina was an activist all of her life promoting her culture, language, arts and crafts. She was a skilled and talented artist, creating dreamcatchers, medicine wheels and all other manners of Tribal crafts. She passed on too many the lore and traditions, making a lasting and deep appreciation for all native things to those who knew her. She often had her own stand at the various powwows selling her arts and crafts. She raised seven boys and one girl in most difficult of times, the 1950’s and turbulent 60’s. Always caring for others and the community in which she was a part of. She will be deeply missed by so many that she had touched in her life. Alvina is survived by her children; Randolph (Deborah) Miller, Jacob Anderson, Jonathan Anderson, Jennifer (Martin) Baker, and 20 grandchildren, 44 great grandchildren and 2 (and 3 more on the way) great-great grandchildren. Alvina was preceded in death by her parents, husbands, John Anderson and Eugene Marshall, sons; Robert, James, Jeffrey, and John, sisters; Esther, Florence, and Irene, brothers; Leonard, Ivan, Archie, and Nicholas; grandchildren Owen Anderson and Tina Anderson Vaclvik. A private time of gathering for immediate family will be held on Saturday January 2, 2021. Funeral services honoring Alvina’s life will take place in the spring/summer of 2021. Alvina will eventually be laid to rest at the Peshawbestown Cemetery. Please share a memory with Alvina’s family by visiting her tribute page at www.reynolds-jonkhoff.com. The Reynolds-Jonkhoff Funeral Home and Cremation Services is serving the family.

The family of Alvina Marshall created this Life Tributes page to make it easy to share your memories.