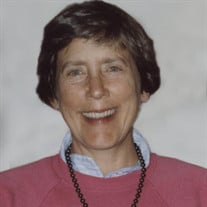 TRAVERSE CITY – Andrea McEwen Field, age 81, of Traverse City, passed away on Tuesday, October 2, 2018 at her home in the loving care of her family. Andrea was born to the late Willard and Esther (Tatnall) McEwen in Wilmington, DE on November 4, 1936. Andrea’s grandmother started The Tatnall School where she spent her earlier educational years in Wilmington until ultimately moving to Woodcliff Lake, NJ where she graduated from Dwight School in 1954. After graduating from high school, Andrea enrolled at Wells College in Aurora, New York where she earned a bachelor’s degree in History of Art and Architecture in 1958. It was while in college that Andrea met her future husband Parker, who was enrolled at Cornell University, Ithaca, New York. After Andrea graduated from Wells, the two were married. While Parker finished up his mechanical engineering degree, Andrea worked in the School of Architecture at Cornell. After Parker’s graduation in 1959, their first child Henry was born in 1960, after which they were able to join Parker who was fulfilling his ROTC commitment in Germany, a three year assignment. While in Germany, they traveled through Europe including visiting Andrea’s ancestral roots in Scotland and England. Upon their return to the States, the family relocated to Detroit. From Detroit they moved to the Chicago area and added to their family with the birth of their daughter Elizabeth in 1964. Over the course of their years, Andrea and Parker lived in 21 different cities all across the Midwest. Andrea was very instrumental in the support of her husband’s successful career. They made a great team. Andrea’s proudest accomplishment was raising her two children to be successful and happy. Additional interests through the years included her involvement with the confirmation showing of dogs which led to her participation in the Basset Hound Club of America where she became a life member. She was also active in the American Kennel Club where she served as a judge for the hound group and she led the way to the recognition of the PBGV breed. Andrea was also a member of the Board of Directors of the Detroit Kennel Club where she served as coordinator of judges education and was a Vendor Chair for the annual DKC dog shows at Cobo Hall. Andrea also loved architecture, art and world history, home renovation, and interior design, needlepoint work, riding horses, her library, and the Michigan woodlands. It was after Parker retired that ultimately brought the two of them to Traverse City where they built their first of four homes on the Old Mission Peninsula. Andrea also volunteered for the Family Court system for the Probate Department in Traverse City, the Traverse City Symphony Orchestra, The Adopt-A-Road program, and the Cherry Capital Cycling Club. Andrea is survived by her husband of 60 years, Parker, children; Henry (Lessly) Field, and Elizabeth (Christopher) Lynch, and grandson, Carson Field. She is also survived by her trusty canine companion, Oscar. Andrea was preceded in death by her parents, and brothers, Henry and Edwin McEwen. The family wishes to express their deepest gratitude to; MediLodge of Grand Traverse County, Comfort Keepers Traverse City, and InTeliCare Health Services in Traverse City, for their wonderful care of Andrea. Per Andrea's request, cremation has taken place, and private family services will be held at a later date.

TRAVERSE CITY &#8211; Andrea McEwen Field, age 81, of Traverse City, passed away on Tuesday, October 2, 2018 at her home in the loving care of her family. Andrea was born to the late Willard and Esther (Tatnall) McEwen in Wilmington, DE on... View Obituary & Service Information

The family of Andrea M. Field created this Life Tributes page to make it easy to share your memories.