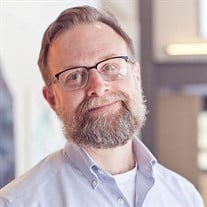 Andrew (“Andy”) Hiss, of Traverse City, Michigan, died in a vehicular accident on August 27, 2021. Originally from Maine, Andy received his M.F.A. in film from the Columbia University School of the Arts, where he met his wife, and received his B.A. in English and art history from Tufts University. A devoted father and husband, Andy was known for his love of books and music, pets, gardening, the outdoors, and time with friends and family. Andy was a faculty member of the Interlochen Center for the Arts’ Film & New Media Department for 10 years, where he taught courses including storytelling, directing and screenwriting. Interlochen Center for the Arts President, Trey Devey, remembered Andy’s "unmatched gift for encouraging students to take themselves seriously as artists and tell their stories … His legacy will live on through the generations of students and colleagues at Interlochen who will be forever inspired by him and his deep sympathy for the human condition." Previously, Andy taught film directing, screenwriting and film analysis at Cornell University, where he was nominated for the Stephen and Margery Russell Distinguished Teaching Award and named a Merrill Presidential Scholar Most Influential Teacher. In addition to his distinguished career as a teacher and mentor, Andy wrote feature length screenplays and directed short films. His film work was screened in festivals across the U.S. and Canada and earned funding through Columbia University and through a fellowship from the Alfred P. Sloan Foundation. His script, The Sun King of Eastbrook, Maine, was a winner at the Columbia University Film Festival and named a quarterfinalist for the Nicholl Fellowship. Before turning to filmmaking, Andy worked as a guitar builder in Maine and Hawaii. He is survived by his wife Lisa Tarchak and their two children; his mother, Paula Curtis-Everett and her husband Michael (Auburn, Maine); his father, William Hiss, his wife Colleen Quint (Minot, Maine) and their children Josh, Jed and Jessy; his sister Katherine Hiss (Auburn, Maine); his aunts Pam and Priscilla, his uncle Peter, and many cousins, nieces and nephews. A private memorial will be held. In lieu of flowers, the family plans to establish a fund in Andy’s memory to support emerging screenwriters, details of which will be available in the future. -Photo Credit: Ellamarie Quimby, Interlochen Center for The Arts

Andrew (&#8220;Andy&#8221;) Hiss, of Traverse City, Michigan, died in a vehicular accident on August 27, 2021. Originally from Maine, Andy received his M.F.A. in film from the Columbia University School of the Arts, where he met his wife, and... View Obituary & Service Information

The family of Andrew "Andy" Hiss created this Life Tributes page to make it easy to share your memories.