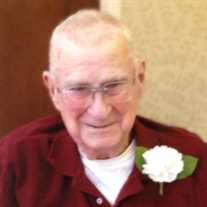 Andrew Lundberg, 93, of Traverse City passed away Wednesday, January 24, 2018 at Tendercare-Birchwood in Traverse City. Andy was born on Monday, January 12, 1925 to the late Andrew and IdaMae (Lake) Lundberg in Traverse City. He enlisted in the U. S. Navy on December 13, 1942 and would serve our country until he retired from the Navy in 1970, having served 28 years. While in the service Andy served in WWII, in the Dominican Republic, the Congo, Viet Nam and the Bay of Pigs. Following his retirement he worked for the Department of Natural Resources and OSHA, until he permanently retired. Andy married the former Joyce Madeline Groleau on Saturday, September 13, 1947 at Sacred Heart Catholic Church in Elk Rapids. They celebrated their 70th anniversary this past September. A member of VFW Cherryland Post 2780 since 1946, Andy served as the Commander in 1993 and 1994 and also was a member and in charge of the Military Honor Guard. He was a life member of the American Legion, The DAV, Retired Enlisted Association, Fleet Reserve Association #358 and was a Hancock Association member since 1980. In his leisure time, Andy enjoyed hunting and fishing and spending time at his property on Drummond Island. Andy is survived by his wife Joyce; children, Janet Rottler of Fountain, Mary (John) Quillan of San Leandro, CA, Kevin "Mika" (Melissa) Lundberg of Traverse City, Barbara Lundberg of Interlochen, Andrew (Leslie) Lundberg of Tallahassee, FL, Catherine (Brian) Variano of Lansing, 17 grandchildren, 31 great grandchildren and 1 great great grandchild. Also surviving is his sister, Dorothy Lardie of Traverse City. Andy was preceded in death by his parents, a daughter, Patricia Allen and a grandson Ricky Melvig. Military Rites honoring Andy's life and service to our country will take place at 11 a.m. Friday, August 3 at VFW Cherryland Post 2780, 3400 Veterans Drive, Traverse City. His cremated remains will be interred at Fort Custer National Cemetery near Battle Creek. Memorial contributions in Andy's name may be directed to The Military Honor Guard c/o VFW Cherryland Post 2780, 3400 Veterans Drive, Traverse City, MI 49684.

The family of Andrew Lundberg created this Life Tributes page to make it easy to share your memories.