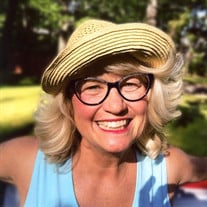 Traverse City, Michigan - We don’t know if you felt it, but many of us did, especially those of us who knew her closely, but on Friday afternoon, June 22, 2018 a great soul departed our being. Those that felt it knew it as a shake, a pause, a tremble, the departing of one of a kind that can never be replaced. At 4:00 pm on that day, Andy Swanson Smith died next to her loving husband Tim and her loving youngest son Jerry after fighting a tough battle against cancer called G.I.S.T. (intestinal tumors) for more than two years. Through it all she was always brave, courageous and optimistic. She was born Mary Ann Walter (later nick-named "Andy" Randy by her father) in Decatur, Indiana on June 12, 1951 and grew up most of her life in Gibson City, Illinois. Everyone in that town knew her as the young smiling and friendly life guard at the community pool, the sparky cheerleader at the high school games, the prom queen waving from the float, a member of almost every club or activity at school, and on, and on. Her energy never stopped as she had a magical way with those that knew her. Cheerleading through life to a college degree, a career as an American Airlines Stewardess, and into marrying her best childhood friend Gus Swanson. Together they raised four children, Jim, Mary, John and Jerry and moved all over the country with Gus' work making life long friends wherever they lived. One of their moves brought them to Traverse City. Little did she know when they moved to Traverse City that she would never leave. After some time, because of life's circumstances she made some very hard decisions in her life leaving the marriage to Gus Swanson and marrying Tim Smith, joining their families, their hearts and their lives. Their marriage became one that few in the world have ever seen or felt. For those who knew Andy, (later nick-named "Grandy" by her grandchildren) they saw a very beautiful woman on the outside but even a more beautiful woman on the inside. She expected very little, had very few demands and always gave more than expected. Her greatest pleasure was giving to others and lived by the plaque on her kitchen that said "Servitude is Love". Her favorite foods were a cheeseburger and butter, but not always in that order. She loved the smell of fresh sheets dried from the clothes line, spending each day with Tim traveling together in their book business and ending each day with their 5 o'clock cocktail. "Grandy" will be missed beyond comprehension. She is survived by her husband Timothy R. Smith, who more than loves her, and her adoring family: James Swanson and wife Bonnie Brummer of Ft. Collins, CO, Mary Swanson Choquette and her husband Andrew of St. Louis, MO., John Swanson and wife Tara of Ashville, N.C., Jerry Swanson and his new wife Ashley Thorington of Traverse City, Jeffrey C. Smith and wife Missy Smith also of Traverse City, Anne C. Smith of Seattle, WA and Alexander Smith living in Amsterdam, Netherlands. She wore eleven Gold bracelets for her grandchildren Avery Swanson, Charlie Swanson, Oliver Choquette, Emmett Choquette, Maisie Choquette, Penelope Swanson, Townes Swanson, Izzy Smith, Lucy Smith, Sadie Smith and Bernie Smith. All will be at the funeral. A brother Mike Walter and best friend and wife Dee Walter of Omaha, NE with all their children and grandchildren. A sister Pat Harper of Gibson City, ILL and her children and grandchildren. Andy had lots of nieces and nephews. The family will greet friends on Friday, July 13, 2018 from 5 to 8 pm at the Reynolds Jonkhoff Funeral Home on Sixth Street in Traverse City. A memorial service will be held the next day, Saturday, July 14, 2018 at 10:00 am at St. Joseph Catholic Church on the Peninsula with graveside services immediately following. Those wishing an expression of sympathy are encouraged to direct a contribution to the Traverse City Public Library (a place she loved to be) or to Michigan Hospice (who gave us so much ending help). To always remember Andy just plant a Shasta Daisy or a Peony (both her favorites) in Andy's honor and she will greet you each summer with a big smile.

Traverse City, Michigan - We don&#8217;t know if you felt it, but many of us did, especially those of us who knew her closely, but on Friday afternoon, June 22, 2018 a great soul departed our being. Those that felt it knew it as a shake, a... View Obituary & Service Information

The family of Andy Smith created this Life Tributes page to make it easy to share your memories.

Traverse City, Michigan - We don’t know if you felt it, but many...