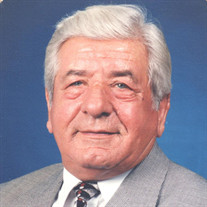 Angelo Onorio Vozza, 87 of Traverse City passed away Monday, November 1, 2021, surrounded by his loving family. Angelo was born on July 11, 1934, in Casalvieri, Italy to the late Giulio Cesare and Maria Vozza. He married the love of his life Maria Assunta Degni on March 11, 1962, in Fontechiari, Italy. Angelo immigrated to the United States with his family at the age of 19. Upon arriving in Detroit he began working in underground construction. With the knowledge he gained by working in the construction field he founded A-Bird Construction and eventually invited his two brothers Anthony and Giorgio to join in the business. After spending the better part of 20 years in the Detroit area Angelo moved his family and business to Northern Michigan, finally settling in Traverse City. During his time in construction, A-Bird Construction was responsible for a large number of infrastructure projects throughout Northern Michigan including the Open Space, Cherry Bend Rd., and US31 along East Bay here in Traverse City. Angelo has always enjoyed working with his hands and being outdoors, upon his retirement he spent his time deer hunting, fishing, woodworking, winemaking, and playing golf to name a few of his hobbies. Angelo was a member of Traverse City Elks Lodge, a supporter of the St. Francis Gladiator football team and GTACS as well as a long-time parishioner of St. Francis Catholic Church. He was sought out at many outdoor events for “Angelo’s Special Cherries” that were known to warm people's bodies and hearts. An encounter with Angelo always brought a smile, a joke, and a special cherry while attending a TCSF football game or a round of golf. His utmost priority in life was his family. He always found the time to be with his family driving home the thought of togetherness, he was extremely proud of his children and grandchildren. Angelo is survived by his devoted wife of almost 60 years, Maria; sons Maurizio (Anna) Vozza, Angelo Vozza, Jr., Julio Vozza, and Adriano Vozza; grandchildren Gabriella (Brandon) Angerbrandt, Sophia Vozza, Mia Vozza, Angelo Vozza, III, Dante Vozza, Massimo Vozza, and Francesca Vozza; siblings Domenica Petrella, Idelma (Robert) Ozarski, and Giorgio (Laurie) Vozza; sister-in-law Linda Vozza; and many nieces, nephews, cousins, and friends. Angelo is preceded in death by his parents, brother Anthony Vozza, brother-in-law Giuseppe Petrella, and daughter-in-law Michele Vozza. On Friday, November 26, 2021, Visitation will be held from 4 to 6 p.m. with a 6 p.m. Rosary at Reynolds-Jonkhoff Funeral Home. Mass will be held at 11 a.m. on Saturday, November 27 at St. Francis Catholic Church with a visitation held one hour prior. Memorial donations in Angelo's honor may be directed to the Saint Francis Building Fund or the Carmelite Monastery in Traverse City. Please share your memories and condolences with the family at www.reynolds-jonkhoff.com. The family is being cared for by the Reynolds-Jonkhoff Funeral Home

Angelo Onorio Vozza, 87 of Traverse City passed away Monday, November 1, 2021, surrounded by his loving family. Angelo was born on July 11, 1934, in Casalvieri, Italy to the late Giulio Cesare and Maria Vozza. He married the love of his life... View Obituary & Service Information

The family of Angelo Onorio Vozza created this Life Tributes page to make it easy to share your memories.