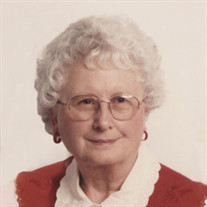 Anita Elaine “Cookie” Fasel, age 91, of Traverse City went peacefully home to be with the Lord on Sunday, March 8, 2020, with her family by her side. Anita was born on October 17, 1928 in Kingsley, Michigan to Leroy and Alfreda (Bancroft) Delancey. On November 14, 1947, in Traverse City, Anita married John Louis Fasel. They were married for 67 years, until John’s passing in 2014. Anita and John raised six children over the years. Anita had several jobs over the course of her life. Her very first job as a teen was at the Traverse City Dairy Bar in Traverse City. This is where she got the nickname “Cookie”, which stuck as her nickname to this day. She worked at several factories over the years. She also went to work for Wilhelm’s Clothing Store, as a seamstress. It was there that she realized her passion and calling was to sew. She opened Anita’s Alterations, which she did until her retirement. On her journey through life Anita’s love for family and friends and spending time with all of them was first and foremost. Anyone who knew Anita knew she could sew anything. No project was too big or too hard. She was always up for a challenge. From making new outfits for the grand kids, to repairing hunting clothes, to making each one of her six kids a quilt. She also loved to knit and crochet all kinds of things for different people. Anita had a love for the outdoors just like her husband, John. She enjoyed more than anything all the times camping with family and friends, and all the trips to their family cabin in the U.P. All of these trips meant the world to Anita, and will forever be treasured. She was an avid bowler and enjoyed the relationships of great friends and family along her life journey. Anita “Cookie” is survived by six children; Laura Ann Fisher of Traverse City, Lyn (Jim) Woodworth of Grawn, Denny (Colleen) Fasel of Traverse City, Gail (Bob) Wiser of Grawn, Greg (Marie) Fasel of Traverse City and Sherry (Doug) James of Traverse City. Her nine grandchildren; Randy Woodworth, Lisa (Mark) Harrand, Treena (Jeremy) Guntzviller, Stephen (Amy) Wiser, Jared (Cassie) Fasel, Clarissa and Hannah Fasel, Preston and Brayden James, and five great-grandchildren; Annastasia Walter, Hayden and Wyatt Guntzviller, Lauren Wiser and Isabelle Northrop. Also surviving are sisters; Theola Hibert, Wilma Melendy, and one brother, Gerald (Joann) Delancey. Anita was preceded in death by her parents, a brother, Merel Delancey and a sister-in-law, Marylou Delancey. Visitation will be held on Thursday, March 12, 2020 from 5:00 to 8:00 p.m. at The Journey Church on South Airport. A funeral service honoring Anita will be held on Friday, March 13, 2020 at 11:00 a.m., with visitation one hour prior at The Journey Church. Burial will follow at Grand Traverse Memorial Gardens. In lieu of flowers, memorials may be made in Anita’s memory, to The Journey Church, 2825 W. S. Airport Rd., Traverse City, Michigan, 49684. Please visit www.reynolds-jonkhoff.com to share your memories of Anita. Anita’s family would like to extend a heartfelt thank you to the staff of Traverse Manor for taking care of Mom for so many years, and also thank you to Hospice of Michigan. The family is being cared for by the Reynolds-Jonkhoff Funeral Home and Cremation Services.

The family of Anita "Cookie" Fasel created this Life Tributes page to make it easy to share your memories.