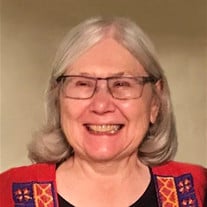 Ann Elizabeth Cooper, 69, of Traverse City passed away as the result of pancreatic cancer, Wednesday, November 6, 2019 at Munson Hospice House in Traverse City, with her husband and son at her side. Ann was born on February 6, 1950 to the late Milton Luther and Grace Elenora (Cilley) Heininger in Ann Arbor. Following her graduation from Saline High School, she continued her education at the University of Michigan where she earned both a bachelors and masters degree. She married James H. Cooper on November 26,1971 in Ann Arbor. An educator, Ann had taught at Pioneer High School in Ann Arbor prior to she and Jim moving to Traverse City in 1979. She then taught at East Middle School and Central High School prior to her retirement. Ann was deeply devoted to her husband, her children, and to her family. In addition to reading, she had a passion for learning, and derived a deep satisfaction from teaching. Ann loved to travel and visited many countries and places around the world. She also loved to cook, garden, hike, and kayak. She developed many friendships at the YMCA and volunteered at the State Theater and the film festival. Ann is survived by her husband, Jim; son, Richard of Traverse City; her sister, Janet (Robert "Buz") Mittendorf of Traverse City; her nieces Laura (Lindley) Zerbe and their children John and Joseph, of Monterey, CA, Erin Mittendorf (Shannon Brines) and their son Aidan, of Dexter; cousins; her brother-in-laws Tomm (Barbara) Cooper of Traverse City and their daughter Sarah (Jason) Ferretti of Vernon, CT and George (Christine) Cooper of Land O Lakes, FL; as well as many extended family. Ann was preceded in death by her son Brian James and her parents. Family services will be held at a later date. The family has asked that Ann be remembered through a monetary gift to the Grand Traverse Bay YMCA, 3700 Silver Lake Road, Traverse City, MI 49684, where she enjoyed being with her many friends.

Ann Elizabeth Cooper, 69, of Traverse City passed away as the result of pancreatic cancer, Wednesday, November 6, 2019 at Munson Hospice House in Traverse City, with her husband and son at her side. Ann was born on February 6, 1950 to the... View Obituary & Service Information

The family of Ann Elizabeth Cooper created this Life Tributes page to make it easy to share your memories.

Ann Elizabeth Cooper, 69, of Traverse City passed away as the...