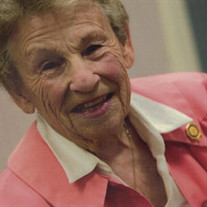 Anna Belle Werner TRAVERSE CITY – Anna Belle Werner, age 96, of Traverse City, passed away on Sunday, February 23, 2020 at French Manor Assisted Living in the loving care of her family. Anna Belle was born on May 6, 1923, in Clayton, New Mexico, to Finley Newton and Gertrude Josie Osborne. Anna Belle was raised working the dairy farm on homesteaded land and graduated with A’s from Clayton High School. She moved to California during WWII where she met the love of her life, Navy Fire Controlman First Class, Robert Werner. They married June 13, 1944, in the Mare Island Naval Base Chapel in Vallejo, California. After the war, they moved to Grand Rapids where they lived until 1966, when they moved to Traverse City. When her husbands job took him around Michigan, Indiana, and Ohio, she packed up the kids and moved with him whenever possible to keep the family together. She traveled extensively with her husband around the United States and Canada, and with her daughter, she visited every continent except Antarctica. She was active in the Grand Traverse Ski Club, spending hours on the hills timing or gate keeping and was a part of the Home Arts Study Club. Anna Belle was a 4-H leader in both Kent and Leelanau Counties and volunteered thousands of hours at Munson Hospital over thirty years. She loved infant discharges above all else. She adored babies and children and especially loved spending time with her four grandchildren and seven great-grandchildren. She taught them many new things and was well loved by them all. She was recognized by many at Beach Bums games since she attended over forty games in each of the first few seasons. She was 85 when she threw out a ceremonial first pitch. She was preceded in death by her husband, parents and siblings, Gerald and Jimmy Osborne, and Lula Belle Dickerson. She is survived by her children, Sallye Werner of Anchorage, Alaska, Kathye (beloved son-in-law Lee) Johnson of Traverse City, and Robert (Diane) Werner, of Freemont, Wisconsin, grandchildren; Julie (Randy), Jennifer, Elizabeth (Mike), and Andrew, and great-grandchildren; Danielle (Liam), Jordan, Jack, Dillon, Avery, Marin and Linley. She is also survived by her wonderful caregivers at French Manor where she shared the last seven years of her life. Anna Belle will be laid to rest next to her husband, Robert at Oakwood Cemetery at a later date. The family would like to extend their appreciation to Hospice of Michigan for the outstanding care they provided to Anna Belle. Memorial contributions honoring Anna Belle may be directed to Hospice of Michigan, 10850 E Traverse Hwy #1155, Traverse City, MI 49684. Please share a memory with Anna Belle’s family by visiting her tribute page at www.reynolds-jonkhoff.com, or by sending a note/letter to Reynolds-Jonkhoff Funeral Home and Cremation Services, 305 Sixth Street, Traverse City, MI 49684, Attn: Anna Belle Werner Family. The Reynolds-Jonkhoff Funeral Home and Cremation Services is serving the family.

The family of Anna Belle Werner created this Life Tributes page to make it easy to share your memories.