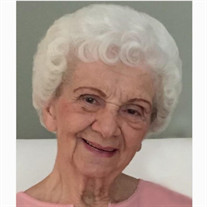 Anna Sirota, 93, of Evergreen Park, Illinois, passed away peacefully October 1, 2021 while living out her final days in Traverse City, Michigan. Anna was born on January 1, 1928 in Hrabovcik, Czechoslovakia to Anna and Nicholas Cuprisin. At age 4, she came to the United States where she eventually met the love of her life, William “Bill” Thomas Sirota, at the Trianon Ballroom in Chicago. They were married on November 1, 1947 and shared 60 years together at their southside home. Anna traveled the world with Bill and loved playing poker slots in casinos, especially in Las Vegas. She regularly gathered with family and friends to enjoy the traditional family cocktail - a vodka martini on the rocks with olives, onions, and a twist. When she wasn't off on an adventure, she found solace in reading, completing puzzles, playing card games, and Scrabble. She worked 30 years for Nabisco as a cookie packer and cracker stacker. After retirement, she became a caregiver to those in need around her - from her husband and parents down to her 11 great grandchildren. Anna was preceded in death by her beloved husband, Bill, siblings, Mary Kennedy and Michael Cuprisin, and son-in-law, David Rush. Anna is survived by her children Carol Ann (Phillip) Cody, Sherry Lee (Larry) Stoltz and Darlene "Dolly" Marie; grandchildren Michelle Cody, Michelle (Frank) Lawler, Jackie (Brandon Sprague) Rush, Jason (Jennifer) Stoltz, Jessica (Mickey) Owen, David (Meghan) Sinon, Christopher (Arielle Valdez-Sinon) Sinon, Nick (Helen Offerman-Sinon) Sinon; great grandchildren Glenn, Allison, David, Parker, Sylvia, Carson, Regan, Sutton, Gregory, Matthew, and Beckham; and sister-in-law Helen Cuprisin. Anna was laid to rest at the Evergreen Park Cemetery in Illinois. Memorial contributions in her honor may be directed to the American Heart Association or to the Dementia Society of America.

Anna Sirota, 93, of Evergreen Park, Illinois, passed away peacefully October 1, 2021 while living out her final days in Traverse City, Michigan. Anna was born on January 1, 1928 in Hrabovcik, Czechoslovakia to Anna and Nicholas Cuprisin. At... View Obituary & Service Information

The family of Anna Sirota created this Life Tributes page to make it easy to share your memories.