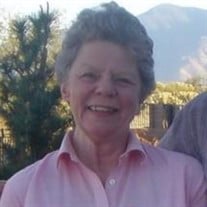 Anne Loring Williams Bogley, 87, died peacefully at her home in Traverse City with family at her bedside. She gave unconditional love to her family, her friends and her community. We mourn her passing but are grateful to have been part of her exemplary life. Anne grew up in the Detroit area. Born June 3,1933 at Harper Hospital, she was the youngest of three children of William Wright Williams and Priscilla Alden Briggs Williams. Mr. Williams had a distinguished career with the Detroit Edison Co. Mrs. Williams roots were in Boston. Education was important to Anne throughout her life. Starting in a one-room schoolhouse in Wing Lake, Michigan, Anne attended Vaughn and Kingswood schools in Birmingham. She graduated high school from St Mary’s In the Mountains, now the White Mountain School, in Bethlehem, New Hampshire. Between her junior and senior high school years, she enjoyed an American Field Service experience in Paris. This reinforced her strong belief in the value of a broad-based liberal arts education. Anne received her bachelor’s degree in history from Cornell University in 1955. She studied at the Sorbonne during junior year and became proficient in French. She remembered with some amusement when the University of Michigan football team came to Ithaca and lost 6-0. Big Blue, however, won the battle of the bands with their brand new “double-time” march-step. While working at Thomas Cooke & Son Travel Agency in Detroit, Anne met a Prudential Insurance representative named Gil Bogley. It didn’t take long for love to take charge. They were married August 31,1956 and had their first child a year later. Unfortunately, baby Priscilla died of a congenital heart defect within six weeks. In the summer of 1959, Anne took her husband to her Uncle John Waite’s cottage on North Lake Leelanau. It rained buckets that week, but one of those rare magical moments occurred when Gil and Anne decided together to start over and grow their family in Northern Michigan. It turned out to be the happiest decision the two ever made. Son Bill was 5 months old when the family came to 10th Street in Traverse City in 1960. Gil worked at the Record-Eagle while Anne’s delightful sense of humor and varied interests enabled her to develop new family friendships. There was Malahini, the Hunt Club, neighborhood gatherings, and Sunday School teaching at Grace Episcopal Church. Anne and Gil became founding members of the Premier Bridge Club, six couples who played a little bridge and helped raise each other’s kids over the next two decades. Anne delivered on her promise that each of her children would receive a quality liberal arts education; Bill at Dartmouth, John at Whitman, and Elizabeth at Middlebury. Her influence in matters of education and informed citizenry extends to her seven grandchildren. Anne loved her adopted community and gave back in many ways. As a volunteer in the Willow Hill library, she helped children learn the joy of discovery. She passed out lollipops to young participants at Sunday morning ski races hosted by the Grand Traverse Ski Club at Hickory Hills (an Andrea Meade Lawrence idea) and served on the Club’s Executive Board for many years. Anne’s elegant skiing style was beautiful to watch. The family moved to Monroe Street in1962 into a house next to Darrow Park and was soon joined by son John (1962) and daughter Elizabeth (1965). Neighborhood friendships were born. Anne became convinced that Traverse City’s close-to-downtown neighborhoods were what made Traverse City so special. She helped found the Slabtown Neighborhood Association, the first such organization in Traverse City. Its goal was to protect the residential quality of the area. Other close-in neighborhood associations soon formed with the same objective. Anne joined with several of Traverse City’s most respected leaders to form the Traverse City chapter of the League of Women Voters. In 1976, Anne was appointed to the Michigan Boundary Commission, where she served until the family relocated to Medford, Oregon for nine years in support of her husband’s newspaper career. All the while, Anne kept her eye on North Lake Leelanau. In 1970, she had helped design a small summer get-away that continues today to be a family haven. After Gil’s retirement in 1993, it became their principal residence. Anne helped form the East Leland Property Owners Association and served as its President. She was also an active member of the Lake Leelanau Lake Association and worked hard in the cause of farmland preservation with the Leelanau Conservancy, knocking on doors to ask her neighbors to preserve the rural character of the county and protect its waters. Anne was preceded in death by her parents and brother Gardner Williams. She is survived by her sister Edith Swallow; husband Gil Bogley; children William, his wife Bea and their children, Ian and Olivia: son John, his wife Shauna and their children, Kathryn, James, and Mark; daughter Elizabeth, her husband Jon and their children, Anna and Mary. A celebration of Anne’s life will be held this summer, Covid permitting. Memorial contributions would be welcomed by the Leelanau Conservancy, the Grand Traverse Regional Land Conservancy and the Traverse City Symphony Orchestra. Please share a memory with Anne’s family by visiting her tribute page at www.reynolds-jonkhoff.com. The Reynolds-Jonkhoff Funeral Home and Cremation Services is serving the family.

Anne Loring Williams Bogley, 87, died peacefully at her home in Traverse City with family at her bedside. She gave unconditional love to her family, her friends and her community. We mourn her passing but are grateful to have been part of her... View Obituary & Service Information

The family of Anne Bogley created this Life Tributes page to make it easy to share your memories.