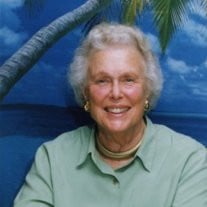 NORTHPORT - Anne Gard Kinzie died Saturday, June 1, 2013. She was born Anne Harrison Gard in Detroit on May 30, 1924, to Paul D. and Martha (Young) Gard. She graduated from the Liggett School and Mary Baldwin College and in 1946 married Henry B. Kinzie. In 1990, they moved from Grosse Pointe to Leland, MI. Anne loved her church. She served and sang at Christ Church, Detroit followed by Christ Church, Grosse Pointe, St. Peter=s in Leland, Grace Episcopal Church in Traverse City and finally at St. Christopher=s Episcopal Church in Northport, where a service celebrating her life will be held on Saturday, June 15, 2013 at 2:00 p.m. with visiting one hour prior to service. Her deep love for children was shown through work in the Junior League, Sigma Gamma, her neighborhoods, and at the Leland School, where, for many years, she led a study in AGreat [email protected] Anne=s needlework was extraordinary. She was one of the [email protected] who made hats for newborns at Munson. Her smocked dresses were first to go at every bazaar. Singing was another talent, whether it was in the church choir, a folly, or at the Leland Sunday Night Sing. Anne is survived by her beloved sons, Thomas Y. Kinzie and William M. (Maria) Kinzie; two granddaughters, Evie and Karla; two great-grandsons, Alex and Danny, two nieces; a nephew; and their children. She was predeceased by her husband, Henry, parents, and a brother, William Y. Gard. Anne=s affection for everyone has enriched the lives of her own family, her extended family to whom she is Granny Annie and Mrs. K, as well as those of her devoted friends and caregivers. She will be missed. She loved her dogs (mostly labs) and her sheltie, Mindy, who spent her last days with Anne at the Northport Highlands. Memorial contributions in Anne=s name may be made to the Leelanau Conservancy, P.O. Box 1007, Leland, MI 49654, or to St. Christopher=s Episcopal Church, Northport, MI 49670.

NORTHPORT - Anne Gard Kinzie died Saturday, June 1, 2013. She was born Anne Harrison Gard in Detroit on May 30, 1924, to Paul D. and Martha (Young) Gard. She graduated from the Liggett School and Mary Baldwin College and in 1946 married Henry... View Obituary & Service Information

The family of Anne Gard Kinzie created this Life Tributes page to make it easy to share your memories.