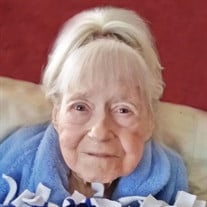 The sweet soul of Anne Olney slipped from her body to the strains of Loch Lomond and Amazing Grace in the wee hours of February 25, 2021. Her love, kindness, incurable optimism, and beautiful smile graced this world for 90 years, touching and inspiring the lives of family and friends of all ages. Born Helen-Anne Quin on March 31, 1931 to John Washburn and Anne Tarbell (Rogers) Quin in New York City, she was nicknamed “Quini” after her parents’ divorce. She moved all too frequently as a child, living in: Jackson Heights, NJ; Palisades Park, NJ; Ottawa, KS; Leona, NJ; Marathon, NY; Cleveland, OH; NYC; and Pleasantville, NY. Her fondest childhood memories were of shoeless summers spent on Tarbell Farms, her great-grandfather’s dairy farm, in Smithville Flats, NY. Anne met her best friend and future husband, Scotty, while attending college in Waterville, ME. While preparing to hitchhike from his home in Waltham, MA to OR, he received her letter that she had broken her leg in Kennebunkport, ME (ultimately requiring 2 surgeries over 2 years). He rushed to her side where he remained throughout his life. They were married August 22, 1952 at the Episcopal Church in Marathon, NY. Besides Marathon, the couple lived in: Baltimore, MD; Massena, NY; Evans Mills, NY; Ann Arbor, MI; and Manchester, MI. In 1970 they settled their family in Northern Michigan, making Traverse City her beloved home for 51 years. Anne was a musician, artist, student of history and literature, and life long learner who studied at Juliard, Colby College, Barnard College, Syracuse University and NMC. During her life she worked as: a trusted aide in the Children’s Polio Ward of Mt. Sinai Hospital; a telephone operator; a bank clerk; an assistant librarian; a retail associate; and at 4-Cs Child Care Council. Her volunteer work included being a Brownie leader in upstate NY and countless years as a room mother, library volunteer, and Olympics of the Mind Coordinator at Oak Park Elementary School. She served in religious education, pastoral concerns, quilting, and as a librarian for the Unitarian Universalist Congregation of Traverse City, which she initially joined, along with her eldest daughter on their birthdays, in March of 1973. Anne was preceded in death by her “Scottish bard” and husband of 44 years, Robert Gordon “Scotty” Olney, in 1996. She passed down her kindness and creativity to daughters Jennifer Rogers Olney, Charlotte Anne Hartley, Catherine Chenoweth-Olney Schlueter (Jeffrey), and Rebecca Tarbell-Olney Smith (Richard), and to her grandchildren: Scotty, Chenoweth, Gage, Ella, and Skye Schlueter; Kayleigh and Spencer Hartley; and Ainsley, McKenna, and Braeden Smith; as well as honorary 5th daughter Karla Richardson Velikan (Randy) and honorary 11th grandchild Thomas Velikan. Grandma Quini laid down to sleep, We pray the Lord her soul to keep. Should friends desire, memorial contributions can be made to: Interlochen Public Radio Memorial Gifts, Grand Traverse Commission on Aging Memorial Fund, or CMU Public Media. A memorial service is being planned for a later date. In the meantime, please take a moment to remember Anne on her 90th birthday, Wednesday March 31, 2021.

The sweet soul of Anne Olney slipped from her body to the strains of Loch Lomond and Amazing Grace in the wee hours of February 25, 2021. Her love, kindness, incurable optimism, and beautiful smile graced this world for 90 years, touching... View Obituary & Service Information

The family of Anne Olney created this Life Tributes page to make it easy to share your memories.

The sweet soul of Anne Olney slipped from her body to the strains...