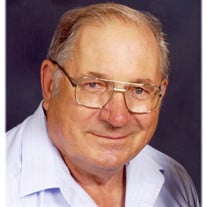 Anthony Galla, 77, of Cedar, Michigan, passed away on Wednesday, January 21, 2015, at Munson Medical Center. Tony was born on January 16, 1938, in Cedar, to the late Michael and Regina (Brzezinski) Galla. He was married to Georgetta Nowlin on October 17, 1959. Tony graduated from Holy Rosary High School, in 1956. He proudly served his country in the U.S. Army. Tony had been employed by Glen Lake Public Schools, as a bus mechanic, retiring in 1998 after over 28 years of service. Over the years Tony received two Golden Wrench Awards from the State of Michigan. Each award was granted for three consecutive years of perfect bus inspection, by the state police. He was a member of Holy Rosary Catholic Church, where he served on the church council as well as an usher. Tony was very involved in his community; he was a member of the Cedar Chamber of Commerce and the Cedar Fire and Rescue. He was one of the founders of the Cedar Hilltopper’s Snowmobile Club, where 16 years ago, he started the Wednesday morning euchre club. Tony enjoyed tinkering in his garage and fishing on Lake Leelanau with his family and friends. Spending time with his grandchildren and great-grandchildren is what gave Tony his greatest joy. Tony is survived by his loving wife of 55 years, Georgetta, two sons and three daughters; David (Pam) Galla, Ronald (Angie) Galla, Donna (Gene) Peterson, Bonnie Schwartz and Jeanette (Rick) Theisen, 23 grandchildren and 9 great-grandchildren. Also surviving are a sister, Esther Crocker, four brothers; Steve Galla, Leo (Loretta) Galla, Walter (Marga) Galla and John (Virginia) Galla, as well as many nieces and nephews. Tony was preceded in death by four sisters and two brothers; Alvena, Dorothy, Susan, Marie, Paul and Donald. Friends are welcome to visit with Tony’s family on Friday from 5:00 to 8:00 p.m. on Jan. 23, 2015, at Holy Rosary Catholic Church, with a Rosary at 7:00 p.m. A funeral mass honoring Anthony will be held at 11:00 a.m. on Saturday, January 24, 2015. at Holy Rosary Catholic Church, with visiting one hour prior. Rev. Fr. Donald Libby will officiate. Those planning an expression of sympathy may wish to consider a memorial donation to the Cedar Fire and Rescue or Holy Rosary Catholic Church. Please feel free to share your thoughts and memories with Tony’s family at www.reynolds-jonkhoff.com. The family is being served by The Reynolds-Jonkhoff Funeral Home.

Anthony Galla, 77, of Cedar, Michigan, passed away on Wednesday, January 21, 2015, at Munson Medical Center. Tony was born on January 16, 1938, in Cedar, to the late Michael and Regina (Brzezinski) Galla. He was married to Georgetta Nowlin on... View Obituary & Service Information

The family of Anthony "Tony" Galla created this Life Tributes page to make it easy to share your memories.

Anthony Galla, 77, of Cedar, Michigan, passed away on Wednesday,...