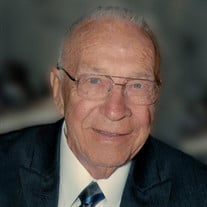 Anthony Fredrick Hajek (Tony) left for heaven on October 6, 2014 with the love of his life, Elsie Jane (Ziel) by his side. Anthony was born June 4th 1929 to Helen (Kelenske) and Anthony Jack Hajek, Sr., Polish and Czechoslovakian immigrants. Tony grew up on West Front St. in Traverse City and attended the Grand Traverse public schools graduating in 1947. Tony was an Eagle Scout. He attended Central Michigan University and earned a degree in business administration. Following college, Tony served 4 years in the army (1951-1955) during the Korean War as a Communications Specialist. Tony is survived by his wife of 58 years, Elsie Jane (Ziel). They shared their love deeply, except for the time Tony gave Elsie a Veg-O-Matic as a Christmas present and the time he brought home a boat and motor without first consulting his sweetheart. Together Elsie and Tony raised three children and is survived by Steve (Flo Puroll), Christopher (Lisa Rosenberg) and Carol (Tom Finch); four grandchildren, Stephanie (RB Kotnik), Ari Hajek, Jamie (Scott Lamont), and Ryan (Amber Lewis); three step-great grandchildren, Tristan, Logan and Keegan Finch; and his dachshund Snickers who predeceased him in his death by one month. He also leaves behind his special neighbors Stephanie and Bill Loomis who are always available to provide a helping hand. Anthony worked for Standard Oil of Indiana / BP Oil as a sales representative retiring in 1983 after 30 years. Tony and Elsie bought Scattergood’s Luggage and Gifts and later Elsie's Hallmark on Howard St. in Petoskey. They also operated several gift shops in Boyne City, Charlevoix, and Boyne Falls. In addition, Tony was instrumental helping daughter Carol and husband Tom open Acme Creek Kennels, located in Williamsburg, MI. On retirement in 1999, Anthony and Elsie moved to Traverse City to join Carol and her family. In his retirement, Tony became a farmer raising all sorts of animals, including dogs, geese, chickens turkeys, ducks, and peacocks. Tony never had anything other than kind words for everyone. Family and friends will miss him. A private burial will take place with immediate family. Family and friends are invited to join in a celebration of his life on October 12th, 2014 from 4 - 8 pm at the Hajek/Finch residence located at 5311 Bunker Hill Rd, Williamsburg. Memorial contributions should be made to a charity of your choice.

Anthony Fredrick Hajek (Tony) left for heaven on October 6, 2014 with the love of his life, Elsie Jane (Ziel) by his side. Anthony was born June 4th 1929 to Helen (Kelenske) and Anthony Jack Hajek, Sr., Polish and Czechoslovakian immigrants. Tony... View Obituary & Service Information

The family of Anthony Fredrick Hajek created this Life Tributes page to make it easy to share your memories.