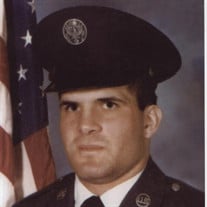 Anthony “Tony” Albion Nemeskal, 61, of Traverse City completed his earthly journey on Dec. 22, 2020 at 12:21, at Munson Medical Center due to complications of MS and COVID-19. Tony was born on February 27, 1959 to Albion Anthony and Vera M. (Shimek) Nemeskal at Munson Hospital. He grew up in the village of Maple City with loving parents, two older sisters and lots of cousins. He attended St. Rita’s Church as a growing youngster and was an altar server. Many winter mornings he would be up early to shovel for Msgr. Fraser, serve Mass, and then be on the bus for a full day at school. He attended Glen Lake Schools. He was a member of the National Honors Society and lettered in football and wrestling. He graduated with the class of 1977. Shortly after he joined the US Air Force, turning down a scholarship to Michigan Tech. He was a proud veteran, serving 20 years. His assignments were in Pensacola, FL, Gwinn, MI and Selfredge Airforce Base in Oscoda, MI. His foreign assignment was in Sicily. He finished his career in Wichita, KS achieving the rank of Sergeant. He was a disbursement specialist. Tony and wife Louise moved to Traverse City to be close to both families after retirement and Tony began working for the US Post Office until his MS made it difficult to work the counter at the Garfield Office. He truly enjoyed interacting with the customers there. As his MS progressed it became necessary for Tony to live at Medilodge of GTC for the past three years. Louise, his loving, devoted partner, who he married in Wichita on November 16, 1996 was his life support and advocate as his health declined and more challenges arose. Tony was a fan and collector of Detroit Lions memorabilia, especially Barry Sanders related. He also rooted for the Red Wings and Tigers. Tony and Louise enjoyed going to the local casinos and traveling several times to the U.P. casinos. Tony especially liked playing Caribbean Poker, and was lucky from time to time. Growing-up in a tight knit family with 20 cousins on his mother’s side alone made for a joyous July 4th, Thanksgiving and Christmas gathering. Tony is the second of 21 first cousins to take his leave. He will be greatly missed the next time we gather. Tony was a kind and caring person with a sarcastic sense of humor like his dad’s. Classmates and friends recall him as fun-loving, generous, kind and a great guy. The staff at Medilodge said he was a great patient and was well-liked. He will be missed, they said. Tony’s family appreciates the care he received over the past three years at Medilodge. The family also appreciates the nearly two weeks of care he received on one of Munson’s Covid Units. A bouquet of thanks to Drs. Macnowski, Spence and Seaver, both RNs named Joe and lastly Marina, who was with Tony when the angels came for him. Louise is grateful for her compassion and that Tony was not alone. Tony is survived by his loving wife, Louise Czerniak Ojala Nemeskal; son Christopher Allen (Jessica); granddaughter Logan Christine Nemeskal of Wichita, KS; sisters Mary Ann and Betty Nemeskal of Maple City; nephews Coty Lee Nemeskal of Maple City, Aaron Anthony (Markie) Nemeskal and their two sons, Tony’s great-nephews Daxton and Lennox of Maple City; aunt Bernice Gallup of Traverse City and many cousins and friends, especially classmates Rich Majszak, Rob Hayes and Rob Schettek. Also surviving are step-sons Jeff and Tim Ojala of Traverse City and Ken Ojala of Leelanau County. He was preceded in death by his parents, grandparents, aunts, uncles and cousins. I lieu of flowers memorials may be directed to the National Multiple Sclerosis Society, PO Box 81891, Washington, DC 20090-1891, St Francis Building Fund and/or Mass Intentions. Mass of Christian Burial will take place Wednesday, December 30, 2020 at 1PM, at St. Francis of Assisi Parish, Traverse City. Visitation at Reynolds-Jonkhoff Funeral Home, Tuesday, December 29, 3-5PM, with the Holy Rosary to be prayed at 4:30PM. Tony will be laid to rest next to his parents in the Cleveland Township Cemetery. If you wish to share a memory or condolence on Tony’s tribute page, you may visit www.reynolds-jonkhoff.com He will wipe every tear from their eyes, and there shall be no more death or mourning, wailing or pain [for] the old order has passed away. The one who sat on the throne said “Behold I make all things new. I am the Alpha and the Omega, the beginning and the end. To the thirsty I will give a gift of life-giving water. The victor will inherit these gifts and I shall be his God and he will be my son.” Rev. 22; 4-8.

The family of Anthony "Tony" Albion Nemeskal created this Life Tributes page to make it easy to share your memories.