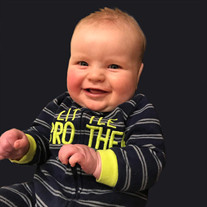 Archer Michael Wheaton TRAVERSE CITY – Archer Michael Wheaton, aged 5 months, passed away on Saturday, April 7, 2018. On October 23, 2017 Branden and Jessica (Dezelski) were blessed with a bright, blue eyed baby boy, Archer, at the Munson Medical Center in Traverse City. Archer absolutely adored his sister, Adalyn. He was just starting to find his voice and was beginning to figure out how to stick out his tongue which always brought smiles and laughter to those around him. He was such a loving baby. He knew just how to manipulate you enough with his big smile and belly giggles to get whatever he was after, whether it was snuggles or he just wanted to eat, he knew how to get through to you. He also had the most kissable chubby cheeks that were admired by all that met him. Archer is survived by his parents, sister, Adalyn, grandparents; Michael (Edie) Wheaton, Traverse City, Steven (Mary) Dezelski, Traverse City, aunts and uncles; Amanda (Jared) Ringwald, Traverse City, Joshua Wheaton, Traverse City, Katlyn (Christopher) Blanchette, Grand Rapids, Kristopher (Nicole) Dezelski, Grand Ledge, cousins; Hunter Ringwald, Leland Ringwald, Celeste Ringwald, and Louis Dezelski, great-grandparents; Richard (Charlotte) Wheaton, Traverse City. Archer is also survived by his large extended family and his furry companion, dog, Jackson. Archer was preceded in death by his great-grandparents; Edward (Dorothy) Stein, Traverse City, Robert (Margaret) Noble, Alpena, Richard (Dorothy) Dezelski, Maple City. A visitation for Archer will take place at Reynolds-Jonkhoff Funeral Home on Wednesday, April 11, 2018 beginning at 4:00 pm until the time of the rosary at 7:00 pm. A Mass of Christian Burial will take place at 11:00 am on Thursday, April 12, 2018 at St. Patrick’s Catholic Church with a visitation one hour prior. Fr. Greg McCallum will officiate.

The family of Archer Michael Wheaton created this Life Tributes page to make it easy to share your memories.