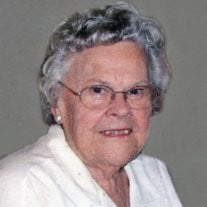 TRAVERSE CITY - Arlene R. Lautner, 89, of Traverse City passed away peacefully on Wednesday, October 30, 2013 at Munson Hospice House surrounded by her family. Arlene was born on October 31, 1923 to the late Edward and Bertha (Lautner) Rokos. Arlene lived a happy, modest childhood on the family farm with her parents, second mother, Aunt Mea, and sisters, as well as her cousin Everett Hunsberger. She had many adventures with her best friend, Jean (Lautner) Bensley at her side. She contracted tuberculosis and was treated in Gaylord Sanitarium from age 16 to 19. While there she wrote to the neighborhood boys serving in World War II including the boy next door, Jerome. Her great determination and strong will led her to leave against doctor's orders to convalesce at home. Miraculously her health returned, enabling her to pursue her dream of returning to and graduating from Traverse City Central High School. She married Jerome Lautner in 1947; he was her best friend, faithful husband and the love of her life for the next 54 years. Jerome built their home on land Arlene had loved since childhood located on West Bay Shore Drive where they raised their two daughters. Arlene was very involved in volunteering her time and talents at Norris School acting as room mother, 4-H leader, PTA member and Girl Scout leader. She was well regarded for her vast knowledge of local history and family genealogy, contributing to local history books. Due to her desire to preserve the land and its natural surroundings, she ran and was elected Elmwood Township Clerk from 1970 to 1988. She was instrumental in establishing zoning and creating a fund to build the current township office building which was paid for in full incurring no debt for the township. She was a member of Immaculate Conception Catholic Church, working on the funeral luncheon committee, as sacristy worker and the women's church guild. Arlene was also involved with the Michigan State University Extension Club and the D.A.V. Auxiliary. She was voracious reader, keeping up with local and national news. She also enjoyed gardening and created beautiful flower arrangements from her garden. Surviving to cherish her memory are two loving daughters, Kathy (Jack) DiPisa and Karen (Ron Wright) Fehrman; three grandchildren, Michael (Corrine) DiPisa, Melissa DiPisa and Kristin Fehrman; three great grandchildren, Vinnie, Dominick and Sophia DiPisa; two sisters-in-law, Mary Lautner and Cleo Cavitch; brother-in-law Cletus Lautner. Also surviving are many nieces, nephews and cousins. Arlene was preceded in death by her sisters Elsie Walters, Matilda Fashbaugh, an infant sister Evelyn Rokos and a special cousin Everett Hunsberger. Arlene's Funeral Mass will take place at 11:00 a.m. on Monday, November 4, 2013 at Immaculate Conception Catholic Church, 720 Second Street. Rev. Fr. Anthony Citro will officiate. Interment will follow in Oakwood Cemetery. Friends are welcome to visit with Arlene's family on Sunday, November 3, 2013 at Immaculate Conception Catholic Church from 6:00 to 8:00 p.m. The family will pray the Rosary on Sunday evening at 7:30 p.m. Visitation will also be held at the church on Monday from 10:00 a.m. until the time of the Mass. Those planning an expression of sympathy may consider donations to Immaculate Conception Catholic Church, Elmwood Township Fire and Rescue Department or Munson Hospice House. Please feel free to share your thoughts and memories with Arlene's family through www.reynolds-jonkhoff.com. The family is being served by the Reynolds-Jonkhoff Funeral Home.

The family of Arlene R. Lautner created this Life Tributes page to make it easy to share your memories.