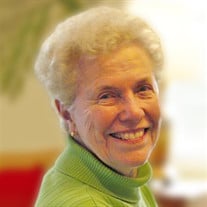 Arline L. Howe, age 90, died very suddenly while talking and laughing with friends at her church on Wednesday night. Earlier in the day, she participated in water aerobics class, spoke with 2 of her children over the phone, and was busy making preparations for the holidays. Family and friends were shocked by this loss because it was entirely unexpected. However, they are also grateful for the way that this happened. Arline enjoyed life right up to the last moment, felt great, had no idea that death was coming, did not die alone or suffer, and departed this earth with her minister and friends by her side. Survivors include Arline’s 3 children--Nancy, Michael and Peggy--and her 6 grandchildren—Phillip, Eric, Kevin, Amy, Doug and Brian. Also surviving is her sister, Barbara Andy as well as many nieces and nephews. Arline was preceded in death by her beloved lifelong husband Marvin Howe and three brothers; DeEstraye R. Schwan, Frederick Eugene Schwan and Robert L. Schwan. Arline grew up in Arizona and rural Ohio, where her father owned and operated a large and prosperous dairy farm. As a junior in high school, Arline married her music teacher Marvin, who was promptly sent to the front in World War II in Europe. Their first child Nancy was born as Arline completed high school, so she was alone as a parent until Marvin returned 3 years later. Marvin and Arline enjoyed a long and devoted marriage while living in a variety of communities where he taught at universities. Marvin taught music at the National Music Camp in Interlochen for many years so this was an important part of Arline’s life also. Upon retiring, they chose Traverse City as their home. Marvin and Arline were very active members of the Grand Traverse Unitarian Universalist Church, which they helped construct at its current location on the peninsula. This became the center of their life where Marvin performed on the French horn. Arline established a Pastoral Care Program there that she led until her last day. She was also an accomplished artist who favored water colors as her favorite medium of expression. Other ties include the League of Women Voters, the water aerobics class at the Grand Traverse Resort, and ethics, quilting and reading groups. A celebration and remembrance of Arline’s life will take place on January 3, 2016 at the Grand Traverse Unitarian-Universalist Congregation Church, 6726 Center Rd., Traverse City, MI 49686, starting with visitation and music at 1:30 p.m. followed by a service at 2:30 p.m. Those planning an expression of sympathy my wish to consider a memorial donation to the Unitarian Universalist Congregation Church. Please feel free to share your thoughts and memories with Arline’s family at www.reynolds-jonkhoff.com. The family is being served by the Reynolds-Jonkhoff Funeral Home and Cremation Services.

Arline L. Howe, age 90, died very suddenly while talking and laughing with friends at her church on Wednesday night. Earlier in the day, she participated in water aerobics class, spoke with 2 of her children over the phone, and was busy making... View Obituary & Service Information

The family of Arline L. Howe created this Life Tributes page to make it easy to share your memories.