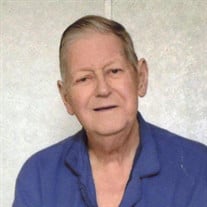 Aron Lee Korb, 81, of Traverse City passed away peacefully on October 30, 2021, at his home surrounded by his family. Aron was born on June 5, 1940 to the late Julius Raymond and Elizabeth (Kenney) Korb. On September 24, 1960, Aron married Alma Marguerite Hendges. Aron grew up in Northport and then the family moved to Grawn. His first job was at Morgan Canning Company on the Bay. He then went on to work for TC Ironworks for over twenty years. Here he helped build fire hydrants, car parts and many other things. His final career was with Tower Automotive where he worked in shipping and receiving. He was always a good hard worker who never complained. In his free time Aron enjoyed spending time outdoors. He loved to go camping, snowmobiling, ice fishing where he would make the best home cooked meals on his wood stove. He also like to go two-tracking, berry picking and morel mushroom hunting. He was a loving man who took great pride in yard work and completing honey-do lists. Aron was a survivor who will be remembered as a man who always put his family first. He will be greatly missed. Aron was preceded in death by his parents, wife Alma, son Raymond, infant brother Allen, and adopted brothers Chuck and Dave Korb. Aron is survived by his children Richard (Suzanne) Korb, Sherry Schimento, and Kimberly (Rob) Hallan; grandchildren Nicole Lapeer, Heather (Brandon) Penick, Mark Schimento, Brittani Lamphier, Myranda (Fiance Alex Arlin) Adamick; great grandchildren Liam and Harper Penick; sister Eleanor (Kenneth) Randall, brother John (Rindy) Korb, Phyllis (Bob) Randall, half-sister Julie (Eric) McCloud, half-sister Jannelle Korb, step-mother Florence Saxton and many other family members and friends. The memorial service celebrating his life will be held on Wednesday, November 10, 2021 at 2 pm at the Church of the Nazarene in Kalkaska with visitation beginning one hour prior. Memorial contributions may be directed to the Church. Interment will take place at a later date at Oakwood Cemetery. Please share your memories here on this tribute page.

Aron Lee Korb, 81, of Traverse City passed away peacefully on October 30, 2021, at his home surrounded by his family. Aron was born on June 5, 1940 to the late Julius Raymond and Elizabeth (Kenney) Korb. On September 24, 1960, Aron married... View Obituary & Service Information

The family of Aron Lee Korb created this Life Tributes page to make it easy to share your memories.

Aron Lee Korb, 81, of Traverse City passed away peacefully on...