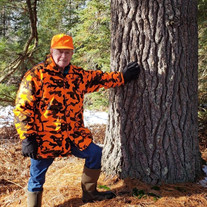 Art Hogarth, 93, of Traverse City, passed away on December 12, 2021 at Munson Medical Center while surrounded by his beloved family. Art was born in Newberry, Michigan on October 12, 1928 to Charles and Ida Hogarth. They moved to Thompsonville when Art was two years old. Art’s incredible work ethic began at the young age of 16 when he went to work on the Ann Arbor Railroad. This work ethic is what led him to join the U.S. Navy at the age of 17 and serve his country proudly. During World War II, he was stationed on Adak in the Aleutian Islands and spent time on the aircraft carrier USS Tarawa. After his discharge, Art returned to the home state he loved. He again worked for the Ann Arbor Railroad, and during this time he met the love of his life, Betty Currie. The pair were married on November 15, 1952. Their first home was furnished by his employer: a caboose on the railroad. Soon after, they wanted to settle down to start a family, so Art got a job at the Traverse City Psychiatric Hospital. He served at the hospital as an attendant and Fire & Safety officer for 34 years. Later, Art gave the best tours of the Traverse City State Hospital. His tours were rich in history, oddities and funny stories. He told them like no one else could, captivating his audiences, who left with a deep understanding of what it was like to work and live there. Art also worked as a bus driver for Traverse City Bus Garage spanning 23 years. During this time Art also became a Coast Guard Reserve. He climbed the ranks to Master Chief and at the time of his promotion he was one of only six in the country. He was a Corpsman and taught many classes for over 20 years, traveling to Coast Guard stations throughout the United States. He impressed those who met him with his dedication in all that he did. In his spare time, Art loved to build. His vacation time was often spent helping family or friends build a house, an addition, a new roof, or other projects. Art loved to travel. He and Betty visited all 50 states in their motorhome, making lifelong friends along the way. His willingness to help others and the way he approached life as a whole drew others to him. The love between his wife and himself was apparent to their close friends throughout their lives. He was a lifetime member of the Northwest Michigan Engine and Thrasher Club. During the Buckley Old Engine Steam Show, Art was the tour guide on the train that ran through the property. His favorite times were the “education days,” when local 4th graders came to learn about trains and their history. Art was the educator on the steam engine No. 7. Art was also a lifetime member of the NRA, the Civilian Marksman Corp and the Elk Rapids Sportsmen Club. Numerous times he won the Turkey shoot with his deer rifle. He enjoyed hunting - especially deer hunting in his later years with his hunting partners: his son John and friend Terry. At the age of 91, he was still hiking in the swamp with his waders on to get to the perfect spot to bag a deer. Even if he didn’t get a deer that year, he always said it was the “best season ever” and cherished the fact that his son made it possible. Art was an incredible man who lived his life to the fullest. He adored his wife and children, and later his grandchildren and great grandchildren. Art kept busy doing the things he loved with the people he loved, and never sacrificed his work ethic along the way. He inspired many with his attitude and approach to life. He will be deeply missed by all who knew and loved him. Art was preceded in death by his parents; wife Betty and 13 siblings. Art is survived by his children Bob (Sue) Hogarth, John (Anne) Hogarth and Barb (Dana) Dana Donovan; grandchildren David (Rachel) LeValley, Jennifer (Cam) Kirby and Alex (Natalie) Hogarth; great-grandchildren Molly and Lilly Kirby, James and Aspen LaValley and Andrew Hogarth; 3 siblings and other nieces, nephews and extended family members. A private family service will occur in the Spring. For those wanting to contribute to something meaningful in Art’s honor - he would suggest you enjoy your life to the fullest and “never let grass grow under your feet.” Those wishing to share memories and condolences may do so on Art’s tribute page, www.reynolds-jonkhoff.com

Art Hogarth, 93, of Traverse City, passed away on December 12, 2021 at Munson Medical Center while surrounded by his beloved family. Art was born in Newberry, Michigan on October 12, 1928 to Charles and Ida Hogarth. They moved to Thompsonville... View Obituary & Service Information

The family of Arthur "Art" Hogarth created this Life Tributes page to make it easy to share your memories.