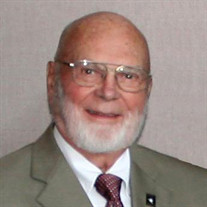 TRAVERSE CITY - Arthur F. Dundon, M.D., 95 of Traverse City passed away May 23, 2016 at his home with his family at his side. Born on April 29, 1921 in Alliance, Ohio to the late Arthur and Edna Dundon, Art was one of three sons. Raised in Alliance, Art received his bachelor’s degree from Mount Union College. He then went on to receive his M.D. from Western Reserve University, one of the nation’s top 25 medical schools as class of 1945. Following his internship at the Menninger School of Psychiatry, Art joined the C.F. Menninger Hospital in Topeka Kansas in 1951, serving as Staff Physician. In 1958, Art and his family moved to Traverse City when he joined the Traverse City Regional Psychiatric Hospital (State Hospital) as Clinical Director. He served there until 1967. Art then began a successful private practice lasting until he retired in 1991. Not one to stay idle, Art “un-retired” in 1993 and went to work for the State of Michigan as a Review Physician in the Disability Determination Services office, here in town. It wasn’t until 2011, at the age of 90 that Art fully retired. For nearly 30 years, Art honorably served our country, first as an active duty member of the United States Army, then as a member of the Kansas National Guard and later as a local reservist in Traverse City. He retired from the United States Army Reserve on April 29, 1981 with the rank of Lt. Colonel and was awarded the Meritorious Service Medal. Art’s life was also marked by his ongoing service to the organizations with which he was affiliated. From serving as President of the Munson Medical Center Medical Staff and Grand Traverse-Leelanau-Benzie County Medical Society and as Michigan State Medical Society delegate to teaching at MSU as Assistant Professor of Clinical Psychiatry, Art contributed his time and efforts. Beyond his career and military service, Art’s passion was sailing. He enjoyed many years racing and sailing the Great Lakes and North Channel, and only sold his beloved “Altair” sailboat last year. Art was a founding member of the Grand Traverse Yacht Club and served in multiple positions including Commodore. He was a member of the Grand Traverse Bay Power Squadron, again serving the organization in multiple roles including Commander as well as teaching sailing classes, such as Celestial Navigation. Art was also an avid HAM radio enthusiast and member of the Cherryland Amateur Radio Club. He was a licensed pilot, a skilled musician, playing with several bands, a historian—reading and taking classes throughout his life, a fine craftsman, a car enthusiast, and never hesitant to start a project. He truly was a Renaissance man. But above all else, Art loved spending time with his family. Art was preceded in death by his wife of 38 years, Jacqueline “Jackie” Kennedy, his son, Tom Dundon and his first wife, Jean Samuels. He is survived by his six children, Art Dundon, Jr. “Gus” of Traverse City, Wayne (Jennie) Walters of Chesterland, Ohio, Kathy (Tom) Britt of Traverse City, Debbie (Don) Thornton of Traverse City, Amy (Marc) McGuire of Carlsbad, CA and Matt (Iwona) Dundon of Nowy Targ, Poland; 11 grandchildren and 17 great grandchildren; his second wife, Ruth Michael; along with many nieces and nephews. A celebration of life gathering will be held on Friday, June 10, 2016 from 12:00 to 3:00 pm at the Elks Lodge on 625 Bay Street, Traverse City. The VFW Cherryland Post #2780 will provide military honors at 1:00 pm. In lieu of flowers, please consider a memorial directed to the Grand Traverse Area Catholic Schools Building Fund. A special thank you to the caregivers from Just Like Family, LLC, and Hospice of Michigan for their help and kindness. Please visit www.reynolds-jonkhoff.com to share your condolences and memories with Art’s family. The family is being cared for by the Reynolds-Jonkhoff Funeral Home and Cremation Services.

TRAVERSE CITY - Arthur F. Dundon, M.D., 95 of Traverse City passed away May 23, 2016 at his home with his family at his side. Born on April 29, 1921 in Alliance, Ohio to the late Arthur and Edna Dundon, Art was one of three sons. Raised in... View Obituary & Service Information

The family of Arthur F. Dundon created this Life Tributes page to make it easy to share your memories.