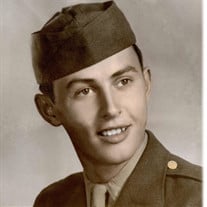 Arthur M. Keillor, age 95, of Traverse City passed away Thursday, January 11, 2018 at his home in the loving care of his family. Arthur was born December 16, 1922 to Earl and Sarah Keillor in Pontiac, Michigan. His parents moved to Reading, Michigan where he attended schools in Reading and Coldwater. He also graduated from Albion High School. After being released from the Army Air Corps he attended and graduated from Argubright Business College in Battle Creek, Michigan. During World War II he served in the Army Air Corps as a pilot, graduating from Eagle Pass, Texas and serving in the China, Burma, India theatre as a Hump pilot. After serving a tour of duty as a Hump Pilot he was transferred to the Headquarters Squadron of the Far Eastern Air Corp in Manilla, Philippines for almost another year of flying, where he flew under General Douglas MacArthur. He was preceded in death by both parents, his son Bruce, his nephew Kenneth, and his brother Harlan who was killed in an airplane accident in 1985. He married Mary Lee Osborn in 1944. She died in 2000 after 56 years of happy marriage. They had two children Bruce (Robin) Keillor of Traverse City, MI and Susan Keillor of Lake Ann, Michigan. Three grandchildren, Justin (Jamie) Keillor, Aaron Keillor and Katie (Julien Herpsont) Keillor. Three great grandchildren, Cameron Joseph Keillor, Madeleine Marie Keillor, and Gisele Ann Keillor. In 2001 he married Mary Alice Galton. Arthur is survived by two daughters-in-law; Kathleen Keillor of Traverse City, the mother of his grandchildren and Robin Keillor of Melbourne, Florida. Arthur spent over 50 years working in the oilfield. He had a 42-year business partner, Edward Maskeny, from Livonia, Michigan. Their office was always in Hillsdale, Michigan, where they owned and operated Mid-Atlantic Oil Co., Mid-Atlantic Drilling Co. and Rose Run Drilling. They drilled and operated wells in Michigan, Ohio, West Virginia, Pennsylvania, North Dakota and Montana. During his time in the oil business he made lifelong friends with his associates; Rose Stommel, Martha Zilch, and Bob Hogle. He also owned Crystal Lake Golf Course in Beulah, Michigan. He was a member of the Presbyterian Church, life member of the Hillsdale Michigan Elks, life member VFA, life member of the Hump Pilots Association, charter member of Myerlee Country Club, Ft. Myers, FL, past member of the Hillsdale, Michigan Country Club and a 15-year member of Grace Episcopal Church. He enjoyed golf, traveling, dancing, reading, theatre (especially opera), owning and flying planes for many years in the oil business. A visitation for Arthur will take place from 4:00 - 6:00 pm on Friday, January 19, 2018 at the Reynolds-Jonkhoff Funeral Home. A memorial service for Arthur will take place at 11:00 am on Saturday, January 20, 2018 at Grace Episcopal Church in Traverse City where a visitation will be held one hour prior. Rev. Kathryn Costas will officiate. The family asks that memorial contributions be directed to; Traverse City Junior Golf Association, 3403 Veterans Drive, Suite B., Traverse City, MI 49684 or Hospice of Michigan, 10850 E. Traverse Hwy Suite 1155, Traverse City, MI 49684. Please share a memory of Arthur by visiting his tribute page found at www.reynolds-jonkhoff.com . The Reynolds-Jonkhoff Funeral Home and Cremation Services is serving the family.

Arthur M. Keillor, age 95, of Traverse City passed away Thursday, January 11, 2018 at his home in the loving care of his family. Arthur was born December 16, 1922 to Earl and Sarah Keillor in Pontiac, Michigan. His parents moved to Reading,... View Obituary & Service Information

The family of Arthur M. Keillor created this Life Tributes page to make it easy to share your memories.