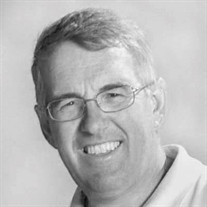 Arthur “Art” J. Primeau of Traverse City, died at age 55 from complications with Mantle Cell Lymphoma. Diagnosed seven years ago, Art undertook the treatment of his cancer in the same way he approached everything else in his life: with humor, patience and quiet strength. Art received a degree in business from Michigan State in 1982, entering the workforce shortly after, making his mark ultimately in the oil and gas industry, serving employer and client alike throughout the next 34 years with his unique ability to represent and serve the interests of both. He always found the positive in every person or circumstance; ever the optimist, he approached the highs and lows of daily life with a confidence and integrity that earned him the trust of clients and co-workers, and above all, the respect of his family and friends. Difficult procedures and setbacks in his cancer treatment were no match for his faith in God. His suffering, rather than being an occasion for anger and bitterness, became his offering of love. “Who am I to tell God what to do,” he once said, “I want to go through this in the hope that no one in my family will ever have to.” Art’s love and devotion to his family was well known and admired. He spent all his free time with his wife Liz of 25 years, and his children, Alex, Evan, Joseph and Sara. He shared the gems of his wisdom while drying tears, comforting with hugs, and offering encouragement. He left a wonderful example of what it means to be a strong and devoted husband and father. He was the guy his brothers and friends turned to for advice on the small and big decisions of life because he was fair minded and thoughtful in his honest replies. Said one close friend, “You didn’t ask Art advice unless you really wanted to know, because he was going to tell you exactly what he thought, and not what you wanted to hear.” He was born on June 7, 1960, to Clarence “Cap” Primeau and Shirley (Ed) Nawrock, the second of four sons, including Mark (Karen), Greg (Ipunk) and David (Tonya). He married Elizabeth Ann Oostermeyer on August 4th, 1990, gaining mother-in-law Sharron, who preceded him in death, father-in-law Joe, and brother-in-law Mike (Cathy). He loved being an uncle to Kaitlyn, Katie, Garrison, Grant, Marcel, Spencer and Isabel. He enjoyed skiing and golf, a good Del Monaco steak, ice-cold PBR shared with his brothers, laughing and relaxing with friends and family on vacations in Florida, or just being at home. He loved going to his children’s sporting events, plays and dance recitals, and considered himself a lucky man. He treasured the every day moments that can be taken for granted, drawing strength from them when things were difficult. Art loved to tell a good story, and in his remaining hours as family and friends sat together around his bedside, sharing memories, his brother Dave laughed and said “Art was always looking for a story, especially when things weren’t going the way he wanted them to, and if I know him, he’s expecting a good story to come out of this.” Art died in the arms of his wife at 4:30 in the morning on Sunday, June 7, 2015, entering eternal life the same day he was born. His life is the story, not of a moment, but of one well-lived, a story that tells about a husband, son, brother, uncle and friend, who will be forever loved and deeply missed. The family wishes to thank the staff of the C4 unit at Munson Medical Center, Dr. Richard Kosinski and Dr. Ethan VanTil for their care and support. Visitation will be at Reynolds-Jonkhoff Funeral Home on Wednesday, June 10th from 1-3 pm and 5-7 pm with the Rosary at 7 pm. The funeral Mass will be celebrated at 11 a.m. Thursday, June 11at Immaculate Conception Catholic Church with visitation one hour prior to the mass. The Rev. Fr. Anthony Citro, Pastor of Immaculate Conception Church will preside . Memorial contributions in Art’s memory may be sent to the Grand Traverse Area Catholic Schools (GTACS), and mass intentions to Immaculate Conception Church. Envelopes will be available at the funeral home and the church. Please share your memories and condolences with Art's family by visiting www.reynolds-jonkhoff.com. The family is being cared for by Reynolds-Jonkhoff Funeral Home and Cremation Services.

Arthur &#8220;Art&#8221; J. Primeau of Traverse City, died at age 55 from complications with Mantle Cell Lymphoma. Diagnosed seven years ago, Art undertook the treatment of his cancer in the same way he approached everything else in his life:... View Obituary & Service Information

The family of Arthur Joseph Primeau created this Life Tributes page to make it easy to share your memories.