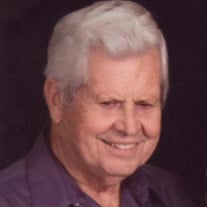 Arthur Lewis Wilkes, 87, of Elk Rapids passed away peacefully on June 12, 2021 at Samaritas with his family by his side. Art was born on June 25, 1933 to the late Harold LaVerne and Segrid E. (Wollpert) Wilkes in Lansing. He along with his brothers, Richard, Gordon and Harold grew up in Lansing where they created many fond memories that Art wrote about in his autobiography entitled “Little Things Meant A Lot”. He gifted a copy to all of his family in 2005 that they now cherish. Art, along with his brothers were members of the Boy Scout Troup 38. In 1951 he earned the Eagle Scout award. Art was the scoutmaster for troop 115 East Bay School from 1971 to 1985 where he mentored 17 boys to Eagle Scout including both his sons Kevin and Kurt. In 1978 he was awarded the highest award for an adult leader the "Silver Beaver Award". Art was also a Vigil member of the "Order of the Arrow". He achieved the highest honors in all categories of scouting including being an inductee to the "B.S.A. 100th Anniversary National Hall of Leadership" Art graduated from J.W. Sexton High School in 1951. Following his graduation, he met the love of his life, Louise M. Gaskill. On Christmas Day in 1953, he asked Louise to marry him and they united in marriage on July 11, 1954 at the German Lutheran Church in Lansing. Art served in the Naval Reserves and was honorably discharged after eight years. Art was a project manager for Manson, Jackson and Kane Architecture firm for many years. In 1969, the family moved to Traverse City when Art got a job with Field, Graheck, Bell and Kline. Following his retiremnt, Art and Louise enjoyed many winters in Sarasota, Florida and then in Casa Grande, Arizona. They also liked to travel together as full time RVers. Art was a member of the Elk Rapids Presbyterian Church, Kiwanis, 4H, the Grand Ledge Jaycees and was the vice president of the Waverly Jaycees and Cherry Festival Ambassador for 10 years. Art was also an accomplished Harmonica player and played up until the week he passed away. In his free time, he enjoyed compiling family genealogy as well, another gift that his family is grateful for. Art was preceded in death by his infant daughter Cynthia Kay and brother Richard “Dick” Wilkes. Art is survived by his wife of 67 years Louise; son Kevin (Jill) Wilkes; daughter Karen (Robert) Robinson; daughter Kathleen (Carlos) Ledezma; son Kurt (Mary) Wilkes; 12 grandchildren; 19 great grandchildren and brothers Gordon (Betty) Wilkes and Harold Wilkes. The funeral service celebrating Art’s life will be held on Friday, June 18th at 1:00 pm, with visitation beginning one hour prior at the First Presbyterian Church in Elk Rapids. Military honors will follow the service at the church. Memorial contributions in his honor may be directed to the Boy Scout Council - Gerald R. Ford Chapter, Gideons, the First Presbyterian Church or to the Salvation Army. Please visit www.reynolds-jonkhoff.com to share your memories and condolences with the family. The family is being cared for by Reynolds Jonkhoff Funeral Home and Cremation Services.

Arthur Lewis Wilkes, 87, of Elk Rapids passed away peacefully on June 12, 2021 at Samaritas with his family by his side. Art was born on June 25, 1933 to the late Harold LaVerne and Segrid E. (Wollpert) Wilkes in Lansing. He along with his... View Obituary & Service Information

The family of Arthur Lewis Wilkes created this Life Tributes page to make it easy to share your memories.