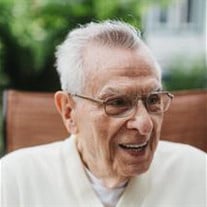 August "Gus" Joseph Scussel, 95, passed away on November 12, 2019. He was born August 30, 1924 in McRoberts, KY, to Italian immigrant parents, Giuseppe "Joe" and Mary (Stellino) Scussel. In 1930, they relocated to Detroit. Gus was an avid learner and progressed through elementary and high schools with proficiency. He attended General Motors Institute (GMI, later Kettering University) and completed an engineering degree. He served proudly as 1st Lieutenant in the Army Corps of Engineers, 583rd Engineer Construction Group, during WWII. He was an active participant in the rebuilding of Japan after WWII and coordinated many Corps jobs of rebuilding roads and bridges there. After his return from service, Gus took a job with Ford Motor Company in Dearborn. He met and married Marguerite Mary Leach in 1950 in Detroit. They had one son, Christopher. During his time at Ford, he coordinated many new engine prototypes. He was active formulating the engines used with the Ford stock car and Indianapolis racing efforts during his time as a Ford executive engineer. He was also the coordinating engineer on the Ford engine that won the LeMans race in 1966, which has since become the topic of a movie, "Ford vs Ferrari". In his spare time, Gus was an accomplished wood carver of his original designs and dabbled in oil painting, gifting the family with many special pieces. Gus was preceded in death by his wife in 2012, after 62 years of a memorable marriage. He is survived by his son Christopher (Anita) Scussel of Traverse City, grandchildren Catherine (Raymond) Lessnau of Marshall and Jacob (Sarah) Scussel of San Francisco, CA, and two great granddaughters, Juliet and Mackenna. Per his directive, Gus has been cremated. There will be no service. A celebration of his life with immediate family will be held at a later date. If you wish, donations may be made to the charity of your choice.

August "Gus" Joseph Scussel, 95, passed away on November 12, 2019. He was born August 30, 1924 in McRoberts, KY, to Italian immigrant parents, Giuseppe "Joe" and Mary (Stellino) Scussel. In 1930, they relocated to Detroit. Gus was an avid... View Obituary & Service Information

The family of August "Gus" Joseph Scussel created this Life Tributes page to make it easy to share your memories.