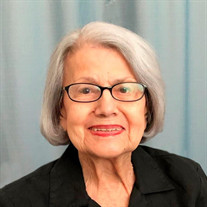 TRAVERSE CITY — Aurora ("Laura") Adelaide Glettler, 100, former longtime resident of Glen Lake, passed away peacefully on Sunday, April 11, 2021. She will be remembered for her ever-present, beautiful smile. Daughter of Joseph and Amalia Blancato, Laura was born and raised in Brooklyn, New York. Her family, jewelers by trade from Catania, Italy, were first-generation immigrants to the United States. She was a comptometer operator in a Brooklyn firm when she met the love of her life, Bernard (“Barney”) Glettler. It was August 1942, in a supper club in New York City, the night before the young Airman—a farm boy and mechanic from Jackson—shipped out to England for World War II. Laura and Barney corresponded across the ocean and when he returned in 1945 they were married. Laura, always affectionately called “Peanut” by Barney, spent the next 25 years traveling the world as an Air Force wife, raising their four children in numerous stateside posts, Newfoundland, Germany and Turkey. Barney retired from the Air Force as a Colonel in 1970 and joined AT&T. In 1975, the couple went to Tehran, Iran, with American Bell—AT&T’s international subsidiary. After four exciting years in another exotic setting, political situations declined and they, and their then teenaged daughter, Katryna, escaped Tehran at the height of the Iranian revolution. Back in the states, and now an empty-nester, Laura loved her work in retail sales, which went naturally hand-in-hand with her love of shopping. Anyone who knew Laura was always in awe of not only her flair for beautiful style, but her uncanny eye for a great bargain. Following Barney’s 1983 retirement from AT&T, Laura and he moved back to Michigan. In all their years travelling their haven on Glen Lake was the one place the family always called home. Laura became actively involved in civic affairs and volunteer activities and was a dedicated supporter of Glen Lake Women’s Club, St. Philip Neri Catholic Church, Glen Lake Yacht Club, Old Settler’s Picnic Grounds, as well as other organizations. The family’s fondest memories will always be the happy times spent together at “Eagles Nest” and the many glorious sunsets shared over Alligator Hill. Surviving Laura are her four children, Joanne (Dennis) Palmer of Sherman, IL, Robert (Elise) Glettler of Ada, Janet (Arthur) Forster of Traverse City, and Katryna (John Sees) Glettler of Traverse City; grandchildren Laureen, Christopher, Wendy, Robert, James, and Brian; twelve great-grandchildren; and many nieces, nephews and cousins. She was preceded in death by her husband Barney, her parents, brothers Frank and Americo (“Rico”), and sister Nancy (LoGrasso). The family would like to thank the staff at the Grand Traverse Pavilions Hawthorne Cottage and Dogwood unit, for the care and comfort they provided the last five years of Laura’s life. A private family burial will take place May 13 at St. Philip Neri Cemetery in Empire. Memorial donations can be made to the Grand Traverse Pavilions Foundation (1000 Pavilions Circle, Traverse City, MI 49684; 231-932-3000; www.gtpavilions.org). The family is being assisted by Reynolds-Jonkhoff Funeral Home & Cremation Services.

The family of Aurora Glettler created this Life Tributes page to make it easy to share your memories.