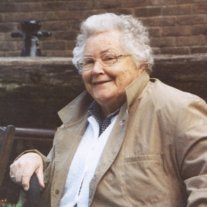 Barbara Dennos “went up” to supervise her husband Michael Dennos in “the big pie shop in the sky,” leaving from her home in Traverse City, Michigan on January 29, 2013, at the age of 90. Not one to take herself too seriously, or flaunt her accomplishments,... View Obituary & Service Information

The family of Barbara Dennos created this Life Tributes page to make it easy to share your memories.

Barbara Dennos “went up” to supervise her husband Michael Dennos...