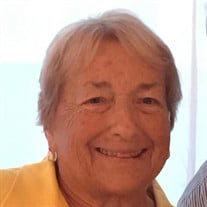 Barbara Lee Kay of Maple City, Michigan passed away on Friday, September 24th, 2021 at the age of 79. She was a loving wife, mother, grandmother and active member of her community. Barbara was born in Neenah, Wisconsin to Richard A. and Dorothy M. Wolterding (later Dorothy Berggren). She met her husband, Richard Kay of Wheaton, Illinois, in 1967 in Deerfield, Illinois. They were married in Waupaca, Wisconsin in 1969 and moved to Cary, Illinois, eventually settling in Barrington, Illinois for the next 25 years. Barbara was a graduate of Neenah High School in Neenah, Wisconsin in 1960 and Michigan State University in 1964. She loved being in the theater club and always reminisced about the different musicals she performed in. After graduation from college, she went on to teach first grade at South Park School in Deerfield, Illinois. In 1971 she left teaching to become a full time mother to her three daughters. She re-entered the world of education in 1978 as a teacher at St. Marks Preschool in Barrington, Illinois and then became an Early Childhood teacher in the Barrington School District and later earned her Master’s degree in Early Childhood Education from National Louis University. She and Richard retired to Glen Arbor, Michigan in 2001. Barbara was always devoted to children’s education. For several decades she taught Sunday School or ran the children’s room at her church. Even in her retirement she volunteered at the Glen Lake Public Library to lead the weekly “Stories and More’ for kids and was affectionately known as “Miss Bonnie”. In 2010 she opened a drop-in arts and crafts studio for young kids called Smocks, in Glen Arbor. She spent her summers giving the gift of arts and crafts to young children for the next ten years. Barbara was active in the Glen Arbor Women’s Club, Friends of the Glen Lake Library and the Glen Lake Garden Club. She loved spending her time traveling, reading, visiting art museums, going to Broadway shows and cheering for her beloved Green Bay Packers. Barbara loved holidays and hosting gatherings for her family and friends. Barbara was always at home “on the lake”. Her childhood home was on Lake Winnebago in Wisconsin, and her retirement home was on Glen Lake in Michigan. She was always happiest when she was on the water. Barbara is survived by her husband, Richard and her three daughters, Lisa (Ryan) Primmer of Darien, Connecticut; Wendy (Joe) Harrop of Waukesha, Wisconsin, Heidi (Joakim) Kay Esaiasson of Traverse City, Michigan; and her seven grandchildren. She is preceded in death by her parents, Richard and Dorothy, her step-father, Roy Berggren, and her brother, Douglas Wolterding (of Woodbridge, VA). There will be an informal outdoor Celebration of Life in Barbara’s honor on Saturday, October 2nd at 1 PM at Old Settler’s Park (8802-8806 Dunn’s Farm Rd., Maple City, MI), just down the road from their home in Glen Arbor. In lieu of flowers, donations may be made in her honor to: Glen Lake Community Library, 10115 W. Front St., Empire, MI 49630

Barbara Lee Kay of Maple City, Michigan passed away on Friday, September 24th, 2021 at the age of 79. She was a loving wife, mother, grandmother and active member of her community. Barbara was born in Neenah, Wisconsin to Richard A. and Dorothy... View Obituary & Service Information

The family of Barbara Lee Kay created this Life Tributes page to make it easy to share your memories.