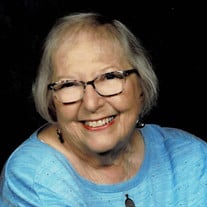 Barbara Ann Richardson, 75, passed away at Munson Medical Center cradled in the loving arms of her four children. Born to the late Gilbert and Elsie (Petrosky) Warnes on April 6, 1946 in Traverse City, Michigan, she was the eldest of twelve children. Early on she learned the skills and demonstrated the personal qualities that she would later be remembered for. Barb had a whimsical side, and her favorite gift as a child was a pair of red cowboy boots. She was also studious, both academically and in the art of caring for others. She was educated in the four-room Glen Arbor school house, often rising early before the other children to accompany her father on his bus route. When Barb was in seventh grade, a boy with mischievous blue eyes caught her fancy. She and Duane Richardson, who lived a stone’s throw away, were meant to be together. On the roller coaster that is young love, Barb strapped herself in and hung on for the ride. Barb’s youth was filled with activity. She learned how to sew, knit, play piano, cook and bake at the knees of her mother and grandmothers. She worked in the family business, Warnes Grocery, took care of her younger siblings, and graduated valedictorian from Glen Lake High School in 1964. She earned a full ride scholarship from General Motors and attended Ferris State College to pursue a degree in accounting. The siren call of Duane’s love cut short her academic career. They eloped and were married on September 19, 1964, officially beginning their fifty-six year journey together. Barb and Duane moved back from Birch Run to their hometown of Glen Arbor to raise their four children surrounded by natural beauty and their six-generation heritage. If you asked, Barb would tell you that her true treasure was her children and grandchildren. She couldn’t have stopped being a mom if she tried. Barb excelled at many jobs in her life, including bank teller, sales clerk, accountant, postal clerk, and partner with Duane. Few people are superb cooks and bakers; Barb was both. Channeling her Polish ancestors, she wanted to feed the world. From home-cooked recipes that she perfected, to elegant wedding cakes, to teeth-tingling frosted cinnamon rolls, no one left her presence hungry. Her door was always open and family and friends were ever welcome at her table. In 1988 she opened Barb’s Country Oven out of the back of Deering’s Market. In 1990, she fulfilled her childhood dream, moving her business to its permanent home on the corner of M-22 and Lake Street in Glen Arbor. Barb was resilient. In 2003, she received her first kidney transplant and continued to do the work she loved. After seven years, that transplant failed, and she was unable to continue with her beloved bakery. Knowing Barb’s heart would break if she could no longer bake, Duane brought home her baking table, refinished it, and set it up in her home kitchen. It was said, “She didn’t quit the bakery, she just moved it home.” In 2015, Barb received a second kidney transplant. Due to complications with that surgery she nearly lost her life, but thanks to her astounding resilience and unwavering faith, she recovered. Six months later, she was able to return to the comforting arms of family and home. Although Barb’s health was compromised, her spirits were buoyed as she began once again to do that at which she excelled: taking care of others the best she could. She continued to cook and bake for family and friends. You would often find her puttering in her flower gardens and know that whether it be blossoms or loved ones she could nurture, it made her happy. Barbara is survived by her four children; Chris (Rachel), Amy (Ken), Ian (Jenny), Jesse (Becky), three grandchildren, Kaia, Gunner and Nolan; eight sisters, two brothers, twenty-six nieces and nephews, and 48 great-nieces and nephews. Barbara was preceded in death by her parents Gilbert and Elsie, her husband Duane, and brother Gilbert Gregory. Visitation will take place on Thursday, November 4, 2021 at 11:00 a.m. at St. Philip Neri Catholic Church in Empire, followed by a funeral mass for both Barbara and Duane at 12:00 p.m. Barb has been cremated and her ashes, along with those of Duane, will be interred in a graveside service with a luncheon to follow. Donations in honor of Barb may be made to the organ transplant charity of your choice or to your local food pantry. The family is being served by Reynolds-Jonkhoff Funeral Home. Please visit www.reynolds-jonkhoff.com to share your thoughts and memories with Barb’s family.

Barbara Ann Richardson, 75, passed away at Munson Medical Center cradled in the loving arms of her four children. Born to the late Gilbert and Elsie (Petrosky) Warnes on April 6, 1946 in Traverse City, Michigan, she was the eldest of twelve... View Obituary & Service Information

The family of Barbara A. Richardson created this Life Tributes page to make it easy to share your memories.