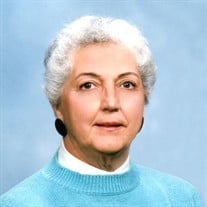 Barbara Jean Steinhoff, 91, of Traverse City passed away Thursday, July 1, 2021 at home. Barbara was born on February 15, 1930 in Platteville, WI to the late Verne Elgie and Arlie Julia (Stowell) Edwards. She married Donald L. Steinhoff on June 27, 1953 in Platteville, WI. Barbara was a devoted teacher for over 30 years. She began her teaching career at Selfridge Air Force Base in southern Michigan and the majority of her teaching years at Mancelona Elementary School in Mancelona, Michigan. She was the church organist for 26 years at St. Paul Lutheran Church in Kalkaska, Michigan, where she and Don were active members of the congregation. She was proud to be a member of the American Guild of Organists. Upon moving to Traverse City, she and Don joined Trinity Lutheran Church. In her spare time, she enjoyed traditional rug hooking. Barb especially enjoyed visiting with family and traveling with Don, her children and grandchildren. Barbara leaves behind her husband of 68 wonderful years, Don, and her children Donald D. (Maureen) Steinhoff, Laura (Marvin) Best, and Jon (Janet) Steinhoff. She is also survived by 6 grandchildren: Michael (Heather), Bryan, Timothy, Jacob, Jason (Kristina), Jenni (Steve) and several great-grandchildren. Barbara was preceded in death by her parents and siblings: John Edwards, Verne Edwards, Dewey Edwards, and Conan Edwards. Funeral services will be held at 1pm on Monday, July 12, 2021 at Trinity Lutheran Church with a visitation beginning at noon at the church. Burial will take place at Grand Traverse Memorial Gardens. Those wishing an expression of sympathy may choose to contribute to the Hospice Of Michigan or Trinity Lutheran Church in Barbara’s honor. Kindly share thoughts and memories with Barbara’s family at www.reynoldsjonkhoff.com. The family is being cared for by the Reynolds-Jonkhoff Funeral Home.

The family of Barbara Steinhoff created this Life Tributes page to make it easy to share your memories.