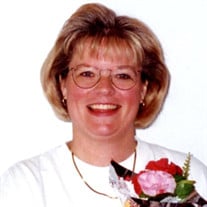 Barbara L. Stricker, age 58. of Traverse City passed away on February 2, 2020. Barb is now in the place of peace with our mom, who passed away last November. Barb was born in Traverse City, MI on August 16, 1961 to William (Bing) and Janet Stricker. She grew up with her siblings on Long Lake and attended Traverse City Jr. High and Sr. High schools. She earned her Associates degree from NMC in Traverse City and then a Bachelors in Finance and Accounting from Central Michigan University in Mt. Pleasant. Barb lived in South Bend, IN right out of college and then in Columbus, OH where she worked as a comptroller, auditing banks in the areas. Then she moved to Grand Rapids, MI working at Old Kent Bank, which later became Fifth/Third Bank and also at FMB Bank that later became Huntington Bank. She worked in compliance, fraud, and was even a vice president for a while. Barb moved back to Traverse City working at NMCAA (Northwest Michigan Community Action Agency) helping families with their finances and budgeting. Her mom moved in with her and the two took care of each other for their remaining years. Barb loved to travel. Her first major trip was visiting several European countries with her college friends before starting her career. She rode camels in Australia, taught students English in Spain and Ukraine, saw Big Ben in England, and vacationed in Mexico and Canada. Several U.S. states were destinations as well, including Connecticut to visit our mom’s side of the family. We also want to thank special friends and neighbors, Dick and Sue Bonzelet and Paul and Sharon Martin who took such great care of our mom for many years and then Barb as her health declined. They were there for anything that was needed plus more. Also, a special thank you to our cousins Sally Walter and Penny Stricker for helping whenever needed and giving great moral support during the past year. Barb is preceded in death by both her parents, Willian (Bing) Stricker and Janet (Storms) Stricker. She is survived by her three siblings: Donna (Henry) Vietzke of Gladstone, MI; Susan (Eric) Holt of Grand Rapids, MI; and Jim (Brenda) Stricker of Cedar, MI. Many aunts, uncles, cousins, nieces and nephews in both Michigan and Connecticut, and her life-long best friend, Terri Campbell also survive her. There will not be a funeral service due to Barb’s wishes. We will have a private family gathering at a later date. If you would like to make a donation in Barb’s name please consider these charities or agencies: Northwest Michigan Community Action Agency (NMCAA), Father Fred Foundation, or the Long Lake Fire Department. Please make a reference to “Barb Stricker Memorial” on any donations. Please feel free to share your thoughts and memories with Barb’s family at her tribute page at www.reynolds-jonkhoff.com. The family is being cared for by the Reynolds-Jonkhoff Funeral Home and Cremation Services.

Barbara L. Stricker, age 58. of Traverse City passed away on February 2, 2020. Barb is now in the place of peace with our mom, who passed away last November. Barb was born in Traverse City, MI on August 16, 1961 to William (Bing) and Janet... View Obituary & Service Information

The family of Barbara L. Stricker created this Life Tributes page to make it easy to share your memories.

Barbara L. Stricker, age 58. of Traverse City passed away on...