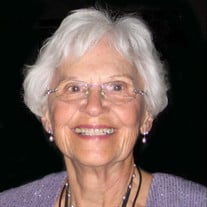 Barbara Leigh Wolff, age 93, of Traverse City passed away Friday evening, December 17, 2021, at the Grand Traverse Pavilions. Born on July 22, 1928 on the family cherry farm on Old Mission Peninsula in Traverse City, Barb grew up with a deep love for her family and her birthplace. She graduated from Traverse City Central High in 1946, where she had met her husband, Ralph E. “Boots” Wolff. They were married on March 22, 1950, at the St. Francis Catholic Church Rectory in Traverse City. She graduated later that year from the E.W. Sparrow School of Nursing in Lansing, MI. After graduating from their respective schools in Lansing, Boots and Barb moved to Ann Arbor so Boots could attend the University of Michigan School of Pharmacy. Upon returning to the Traverse City area in 1953, Boots began working at Petertyl Drug. Eventually, Barb and Boots became co-owners of the drugstore for many years. She worked alongside her husband at Petertyl, and was an excellent businesswoman. What brought Barb her greatest sense of pride and joy was being a homemaker to her family of six sons. During those years, she was a Cub Scout Den Leader, and all of her sons obtained the highest rank of Eagle Scout. She was a previous member of St. Francis Church. A social person, she loved being with her friends at the Old Mission Women’s Club, the Traverse City Golf and Country Club, the Potluck Club, and the Friendly Garden Club. She thoroughly enjoyed watching sports with her family at home, traveling, and playing bridge and tennis and golf. Barb loved the beauty of her beach on Old Mission Peninsula where she grew up, and where her family has spent countless hours. Barb was predeceased by her husband of 70 years, Boots, who died on June 1, 2020. She is survived by her six sons and their spouses: Cameron and Valerie of Sunbury, Ohio; Kirk and Beth of Carmel, Indiana; Jim and Dixie of Traverse City; Jeff and Peggy of Reno, Nevada; Robert and Teri of Traverse City; and William J (“BJ”) and Janet of Traverse City. She also leaves behind eleven grandchildren: Sara Wolff, Danielle Wolff, Kent Wolff, Rob Wolff, Ryan Wolff, Erin Bach, Allen Wolff, Eric Wolff, William Miceli, Audrey Wolff, and Ben Wolff. Her eight great-grandchildren survive her as well. In recent years, Barb became a member of St. Joseph Catholic Church on Old Mission Peninsula, which is where her funeral will be held on Friday, January 28, 2022, at 11:00 am. A gathering of friends and family will begin at 10:00 am, and a luncheon will be held immediately after the funeral in the church social hall. Her interment will take place at Oakwood Cemetery. The family would like to thank the staff at the Elm’s Unit of Grand Traverse Pavilions for their excellent care of their mother during her stay there. Memorial contributions can be made to St. Joseph Catholic Church or the Father Fred Foundation. The family is being cared for by the Reynolds-Jonkhoff Funeral Home. Kindly share your thoughts and memories of Barb at www.reynolds-jonkhoff.com.

The family of Barbara Leigh Wolff created this Life Tributes page to make it easy to share your memories.