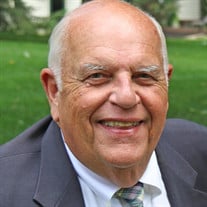 Barry George Godwin, age 76 of Traverse City, Michigan, passed away on Thursday, September 16, 2021 surrounded by his loving family. Barry was born on February 23, 1945 to the late George Godwin and Mildred (Schmidt) Godwin in Saginaw, Michigan. From a young age, Barry was the life of the party. He staged plays in the family garage, hosted groups of friends for swim parties, and generally never wanted to miss a minute of fun. He doted on his little sister Barb with whom he always had a special bond. Everyone knew him for his infectious sense of humor, his compassion and positive approach to life. He had a welcoming smile and the phenomenal ability to focus a conversation on the other person, then banked his or her name, family, birthday, anniversary or any other detail for future reference. Everyone he met became his friend. Barry was a graduate of Arthur Hill High School in Saginaw where he became a member of a circle of lifelong friends. They gathered every summer and were together this August for a reunion in Traverse City. He also had a close group of friends and family in Saginaw he dubbed “The Nut Cup Society” (a nod to the little cups of nuts shared at their childhood birthday parties). While living in Saginaw Barry was the president of the Saginaw Art Museum and a member of The Saginaw Club. He was a proud graduate of Michigan State and followed his passion for hospitality and marketing skills in his career. His first job was at the front desk in the early days of “The Kingdom of Schuss Mountain”, he gained the title of Admiral Barry in charge of the flotilla of imaginary boats in the moat to protect the Kingdom. He and a few fellow employees were known as the “Rinky Dinks” who sang and danced for guests. He returned to Saginaw to work in the family business for several years, but his desire to live and work in Northern Michigan pulled him back. He joined Shanty Creek in sales and marketing where he was known throughout the state - promoting conventions, skiing and golf. He enjoyed a stint at The Homestead in Glen Arbor before being drawn back to Shanty Creek. After leaving Shanty Creek he continued to use his talents and created The Godwin Group, a local marketing consultancy. Throughout his career, Barry held various positions that promoted hospitality and Northern Michigan. He was the president of Circle Michigan, the Grand Traverse Area Hotel Motel Association, the Traverse Area Arts Council, and the Antrim County Chapter of the Michigan State Alumni Association. In 1974 Barry married his “Funny Girl”, Nancy Breitmayer. Together they enjoyed travelling, skiing, entertaining, collecting art, and raising their daughter Libby. She was the bright light in both of their lives. During the summer Barry was a fixture at the Torch Lake Yacht and Country Club (TLYCC) and throughout Bellaire, MI. He often started his day over coffee in town, consistently making friends who became like family. Over the years he spent time as a TLYCC board member and planned numerous Regatta parties - most recently for the NCESA National Regatta. He was also well known for the “ice cream cone for a piece of beach glass” arrangement with the kids. His presence on the porch will be sorely missed by all. Barry had an amazing network of friends in Traverse City. He was a familiar and beloved presence across town at places including Edson Farms, That’sa Pizza, Boon Street Car Wash, Bulldog’s Barber Shop, the gym and Burger King where he loved the $0.75 senior coffee. The streets of TC won’t be the same without the silver Honda Pilot with the TLYCC burgee driving around town. Barry is survived by his daughter, Elizabeth (Theodore) Tubekis and his granddaughter, Breitmayer Godwin Tubekis, his sister, Barbara Godwin-Chulick, his niece Emily Godwin-Chulick and his nephew Samuel George Godwin-Chulick. Barry is also survived by many other family members and friends who were like family. He was preceded in death by his wife, Nancy Breitmayer Godwin, his brother-in-law, David A. Chulick and his parents. A visitation will be held on Wednesday, September 22, 2021 from 4:00 – 6:00 p.m. outdoors, in the Garden at Reynolds-Jonkhoff Funeral Home, 305 Sixth St. Traverse City, Michigan 49684. A funeral service honoring Barry, will also take place in the Garden at Reynolds-Jonkhoff Funeral Home on Thursday, September 23, 2021 at 11:00 a.m., with visitation starting at 10:00 a.m. The family requests COVID-19 vaccinations and masks for all attendees. Private interment will take place at the Torch Lake Township Cemetery. In lieu of flowers the family asks that memorial contributions be directed to The Dennos Museum Center, 1701 E. Front Street, Traverse City, MI 49686 or the Grand Traverse Regional Land Conservancy, 3860 N. Long Lake Rd #D, Traverse City, MI 49684. Please feel free to share your thoughts and memories with Barry’s family at his tribute page at www.reynolds-jonkhoff.com. The family is being cared for by the Reynolds-Jonkhoff Funeral Home and Cremation Services.

The family of Barry George Godwin created this Life Tributes page to make it easy to share your memories.