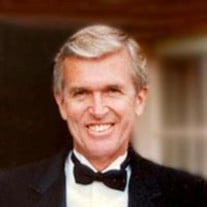 Barry Richard Harper, age 88, of Pearl Lake died peacefully Thursday, August 12th, 2021. He was born on March 21st, 1933 in Pontiac, Michigan, son to Clifford and Mary (Green) Harper. On June 27th, 1962, he married Evelyn Allen of Distant, Pennsylvania, who survives him. Barry served four years in the U.S. Air Force, and after he returned home, he entered the insurance field, working initially in sales and later in management. At age 40, the exercise bug hit him, and for the rest of his life, he actively participated in marathons and triathlons, sometimes traveling to other states to compete. Later in life, he became an avid cyclist and received a plaque from the Cherry Capital Cycling Club for riding 50,000 miles. When a developer planned to build extensively on Pearl Lake, where he and Evelyn had built their retirement home, Barry led the group that succeeded in saving the exquisite natural jewel in northern Benzie County. He considered this one of the most important accomplishments of his life. Barry is survived by his three children, Judith Wishin, Jill Hilburn, and Thomas Harper; his five grandchildren, Joseph, Kiersten, Emma, Hannah, and Logan, and a brother, Michael. He is preceded in death by his parents and a brother, Frederick. In lieu of flowers, the family would appreciate donations in Barry's name to the Grand Traverse Regional Land Conservancy and Traverse Area Recreation and Transportation Trails (TART Trails). A celebration of Barry’s life will take place at a later date to be announced. You may share memories and condolences on Barry’s tribute page, www.reynolds-jonkhoff.com

The family of Barry Harper created this Life Tributes page to make it easy to share your memories.