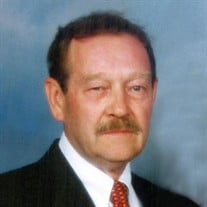 Basil I. Gray, 82, of Traverse City passed away peacefully on Wednesday, April 13, 2016 at Munson Medical Center surrounded by his loving family. Basil was born on January 27, 1934 at his grandmother's house in Williamsburg, Michigan to James and Izetta (Oliver) Gray. He graduated from Williamsburg High School in 1952. In 1953 he entered the U.S. Air Force and was stationed in French Morocco. After this first assignment he returned and married the love of his life, Marilyn (Groleau) Gray. They moved to Sault Ste. Marie, Michigan where Basil was stationed and where their four daughters were born. From there they traveled to France, England, Texas and South Dakota prior to Basil's retirement and move to Traverse City in 1973. Basil took up shop with his brother, Jim Gray at Northwestern Electric and later moved to Alpine Electric doing what he did best, restoring and repairing all that was broken. A calm and steady man, thoughtful and purposeful, he was a source of unconditional strength and love to all who knew him. And yet, beneath the quiet demeanor was a man whose high school motto was, "Never speak sense when nonsense will answer the purpose as well." With a glint in his eye, teasing and story-telling, he was the life of every party. A country boy at heart, he embraced the simple life of his childhood roots riding his bike, hopping on a train to Traverse City for a movie, and hunting with his dad. He continued his love for his family and hometown by researching his genealogy and by becoming an enthusiastic member of the Williamsburg Historical Society. He was an avid hunter with both bow and rifle and loved camping and fishing with both his children and grandchildren. Surviving Basil are his daughters Sharon (Steven Kaplan) Gray of Milwaukee, Susan Ritchie of Seattle, Nancy Gray of Traverse City, Carolyn Gray of Seattle; grandchildren, Bethany (John Richards) Stormer, Lauren Kaplan, John Stormer, Benjamin and Lydia Ritchie, Basil E. Gray; great-grandchildren, Isabela Nibur, Franklin Richards, Ruby Richards; his sister Anna Lou Gilmore. He was preceded in death by his wife, Marilyn and his granddaughter Emily Ann Ritchie, his siblings Earl, Dolores, James, Joyce, Nela, Norma. Funeral services will be held at Reynolds-Jonkhoff Funeral Home beginning with visitation at 2:00pm, service at 3:00pm on April 23, 2016 and reception following at Sleder's Family Tavern at 4:30pm. Those planning an expression of sympathy may wish to consider donations to the Father Fred Foundation.

Basil I. Gray, 82, of Traverse City passed away peacefully on Wednesday, April 13, 2016 at Munson Medical Center surrounded by his loving family. Basil was born on January 27, 1934 at his grandmother's house in Williamsburg, Michigan to James... View Obituary & Service Information

The family of Basil I. Gray created this Life Tributes page to make it easy to share your memories.

Basil I. Gray, 82, of Traverse City passed away peacefully on...